Who is an intrapreneur? Usually highly self-motivated, proactive and action-oriented people who are comfortable with taking the initiative, even within the boundaries of an organization, in pursuit of an innovative product or service. This series examines eight companies that encourage an intrapreneurial culture. Read other stories about Telus, Hootsuite, Metrolinx, Loblaw, Duha Group, Oil Country Engineering Services and Absolute Software.

It's a familiar sight: kids in tuques and snow boots standing impatiently at the checkout counter, as a parent fumbles with Canadian Tire Money, those colourfully corny coupons that have been part of Canadian family life for more than 50 years.

But now at the checkout, you might just as readily see a customer whip out a cellphone and check their Canadian Tire Money total as a mere dollar figure, that is, a store credit on an app. Or check the total by swiping a store credit card. It may be simpler, but it loses the hominess of the fake money.

Yet it's one of the main signs of the e-tailing, intrapreneurial culture that Canadian Tire Corp. Ltd. is embracing in its late rush into digital. In 2009, the retailer had even abandoned online retailing all together, only to return in 2011.

Augmenting the retail giant's digital networking backbone is the Cloud Nine computer centre in Winnipeg which enables customers to perform everything from app transactions to checking a product's in-store availability, from viewing digital owner's manuals to watching an in-store video of a product in action.

"That synchronization of in-store and online – we call that pre-shop, shop and post-shop – creates a closed loop for the customer, where they can actually have a much better shopping experience. We believe that is the future," said Eugene Roman, Canadian Tire's chief technology officer. "That's what we call e-tailing. The whole world is heading toward that."

To change the way Canadian Tire does business, head office and its network of independent store owners had to adapt to an intrapreneurial strategy, he said, so that the new e-tailing push could take hold within the larger organization.

Halfway between its corporate offices in Calgary and Toronto, the Cloud Nine centre opened in April this year, as a backup to its computing centre in Brampton, Ont.

It was very much an upgrade. The Winnipeg facility is said to have 10 times the network bandwidth compared with what it previously had and 20 times the computing power, and it sends out all the retailer's digital content, pictures, in-store digital signs, inventory, user manuals, warranties; everything digital. The operation is housed in the same Winnipeg computing centre as Air Canada's global ticketing operations.

"As the stores have more customer-facing devices – kiosks which we have deployed, point-of-sale devices, digital signage – all of that has to talk to a data centre, a cloud computing centre. Every time we need content, it all comes out of Winnipeg," Mr. Roman said. "All of that information in one place – with tremendous amounts of storage, but also the ability to retrieve that information on demand."

Many retailers, particularly smaller ones, outsource this to third parties, given the expense, but also to stay technologically nimble. "We believe that's not the correct strategy. We believe that this is mission critical – to have our own cloud computing facility," Mr. Roman said. "It's very important to be able to turn things up very, very quickly."

Few companies have the size to create this kind of digital system though. Canadian Tire and the retail chains under its umbrella, such as Sport Chek and Mark's Work Wearhouse, together have the kind of robust capacity that compares only to huge retailers such as Wal-Mart or Staples.

While smaller retailers partner with app producers, the largest retailers need that technology and innovative culture in-house, the argument goes, otherwise they would move too slowly.

"Customers are adopting technology, and their behaviours are changing on a daily basis," said Suthamie Poologasingham, a director of research and specialist in marketing and e-commerce with the retail consulting firm J.C. Williams Group.

That's the challenge. Shoppers are fickle creatures. They have both a browsing and analytical mindset when shopping online or in-store. They may be looking for a particular lawn mower, but then again, maybe a weed wacker would do.

They don't abide by hard, data analysis patterns. So this adds to the complexity of building a digital retailing environment. It requires multiple algorithms running at once to try to cater to fickle needs. "Think of it as a combination of Google, YouTube and eBay all in one," Mr. Roman said.

"We can turn on apps now, on to people's smartphones or tablets very, very quickly. We can do things in hours and days which used to take weeks and months. To switch on a new Web-based server, we can do that in 12 minutes. It used to take us upward of eight weeks," he added.

Unlike many retailers, Canadian Tire didn't build apps and then look for systems on which to run them. It did the reverse, building its own computing system and then developing apps and other digital functions to exploit that system, another sign of the bigness of the operation. Some of those functions are coming from its ideas lab in Winnipeg dubbed NEWcleus, with 20 staff members in the app and innovation teams, as well as its lab in Kitchener. For instance, a Sport Chek store in Toronto has a wall of sports shoes showing videos of the shoes in use.

For Canadian Tire, it's about keeping that app creation in-house. "When you go to an outsourced or digital agency, they're going to have their ideas and do what they need to do, and they'll help you build it. But also, that's where it ends," says Craig Haney, manager of Canadian Tire Innovations. But if those people are within the company, one idea can lead to the next more spontaneously, he said.

Data congestion, particularly in the Toronto area, helped to push the Cloud Nine to Winnipeg so it could be on the national fibre optic route, Mr. Roman said. Other factors making Winnipeg beneficial included getting enough space at Air Canada's computer centre, getting Manitoba Power to ensure sufficient electricity, and to get telecoms All Stream and Bell Canada to provide the network.

It all sounds, though, more like running a telecom rather than a personable, neighbourhood hardware-store shopping experience. Mr. Roman himself came from a career at Bell Canada, followed by a stint as chief technology officer at software company Open Text in Waterloo.

But he argues that the online link is what customers now expect. "The benchmark is set by the online world. The speed of getting information out of the centre is counted in seconds, in fact, sub-seconds. The customer isn't going to wait." 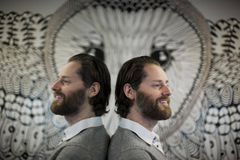