We are in the final stages of an occasionally nasty campaign to block the $1.5-billion takeover of one of Canada's largest construction companies, Aecon Group Inc., by a far larger state-controlled Chinese firm.

It is a government relations battle that Aecon's domestic competitors are unlikely to win. The bid from China Communications Construction Co. Ltd. (CCCC) needs only the blessing of the federal Liberals to move forward, and to date, the rivals have been unable to make a convincing argument against the deal.

So instead, we're into mud-slinging. Journalists are receiving the electronic equivalent of plain brown envelopes: Anonymously e-mailed files are arriving, stuffed with stories about accidents and corruption at CCCC projects. The packages also contain a loopy argument that Aecon chief executive John Beck should turn down this deal because his wife, National Post columnist Diane Francis, has been critical of China's approach to business in past articles. As if this is the first marriage where a husband and wife hold opposing views?

If Canada's largest construction firms are really worried about a massive, state-controlled Chinese company elbowing its way into their sandbox and grabbing all the best toys, here is a simple solution: Step up and buy Aecon.

Construction is one of the few domestic sectors still dominated by Canadian companies. In an attempt to preserve the status quo, three of the largest players – privately owned PCL Constructors Inc., Ledcor Group and P.W. Graham & Sons Construction – made a pilgrimage to Ottawa last Thursday to urge the Department of Innovation, Science and Economic Development to block the CCCC takeover.

These companies had every opportunity to acquire Aecon last summer, when the Toronto-based company put itself up for sale after deciding it was too small to compete for increasingly large projects in Canada and abroad.

Domestic rivals, in theory, could pay a premium for Aecon because they would be able to reap cost-cutting synergies not available to CCCC or any other foreign buyer. The largest local firms, with backing from the likes of domestic pension plans that can't seem to get enough cash into infrastructure investments, have the capital needed to seal this deal.

But as is so often the case in Canadian business, local heroes are reluctant to take the risks that come with leaving the cozy home market and doing battle on a world stage. They're spooked by the fate of companies such as Carillion PLC, the British construction firm that collapsed this week after piling up excessive debts.

Instead, reporters get anonymous packages detailing an accident on a CCCC project in Guangzhou that killed seven workers and politicians are pressed to nix a foreign takeover.

Attacking rivals over safety issues is dangerous ground for any construction company. The industry is prone to accidents. Scan the headlines, and you'll find six people were injured in September at a PCL construction site in Coquitlam, B.C., when a dump truck ran amok; a Ledcor contractor died after an explosion at a B.C. power plant three years ago; and that a 21-year-old Graham worker was killed at a hospital project in Saskatoon in 2016.

On the political front, there is every indication that, to date, the rival construction firms failed to push Ottawa's hot buttons. The federal government measures foreign takeovers on their net benefit to Canada; in theory, it blocks transactions only if there would be a clear loss of competition, or massive job cuts or significant risks to public safety and national security.

Welcoming one of the world's biggest construction companies to Canada means bringing a deep-pocketed player into a home market as the federal Liberals push an ambitious infrastructure agenda – the federal government alone is expected to drop $185-billion on projects over the next decade – and launch trade talks with China. For politicians, all sorts of benefits come with approving CCCC's offer.

Ottawa's review of the proposed Aecon takeover could wrap up as early as the end of January. The only way a rival can be certain of stopping the deal is to top it. Who dares, wins. 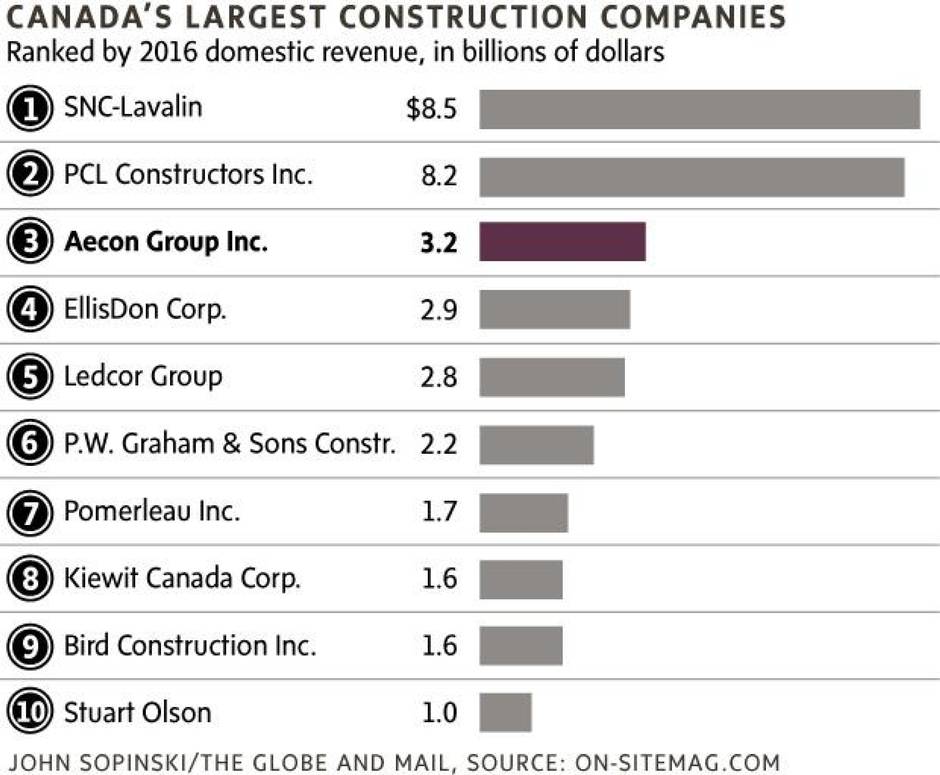