American telecom giant AT&T has severed ties with embattled golfer Tiger Woods, whose descent into a tabloid maelstrom has had a financial cost that goes well beyond his own household.

According to a new estimate, allegations he cheated on his wife have wiped between $5-billion and $12-billion (U.S.) off the market value of companies caught in the crossfire.

"We are ending our sponsorship agreement with Tiger Woods and wish him well in the future," AT&T spokesman Steven Schwadron said in an e-mail to The Globe and Mail. That sentence appears to be the only public statement AT&T is making about its decision to drop Mr. Woods.

The company has not revealed the value of the agreement, believed to be worth millions, nor will it elaborate on why it is ending it now - a month after Mr. Woods crashed his SUV outside his Florida mansion, unleashing a flood of rumours of an altercation with his wife over allegations he cheated on her.Endorsement contracts have played the biggest role in making Mr. Woods perhaps the wealthiest athlete in history. While many have criticized the amount of publicity his private life has garnered in the past month, there are some indications the affair has had a serious financial impact - not only for the golfer, but for the firms with which he is affiliated.

Shareholders of the golfer's major sponsors - such as Nike, Gatorade and AT&T - have lost somewhere between $5-billion and $12-billion in market capitalization as a result of the beating his image has suffered, according to Victor Stango and Christopher Knittel, economics professors at University of California Davis.

The researchers looked at stock-market returns for several of his corporate sponsors in the 13 trading days between Mr. Woods's car crash and his announcement that he was leaving golf indefinitely, comparing them with other companies in the same industries. They say the scandal reduced shareholder value in those companies by 2.3 per cent.

"While most media discussions of the economic impact of these events have focused on Mr. Woods's diminished earning prospects, our estimates suggest that the losses incurred by sponsors' shareholders are at least as great as those sustained by Mr. Woods, and may be much greater," the researchers wrote. "The upper range of our shareholder loss estimates far exceeds the lifetime income that Mr. Woods could expect if one projects his 2009 endorsement income over the next few decades."

AT&T is the latest big-name firm to sever ties with Mr. Woods, who is believed to have once raked in upward of $100-million a year from his myriad corporate sponsorships - far more than his income from golf. Two weeks after his infidelity became public news, Mr. Woods lost his sponsorship deal with Accenture Ltd., a global consulting firm.

Rather than cut ties with Mr. Woods completely, however, many firms are simply backing off. Gillette, the razor maker owned by Procter & Gamble Co., has moved to minimize its relationship with the golfer, cutting back ads in which he was featured. Swiss watch maker Tag Heuer has taken a similar approach.

The companies that have cut back or completely severed ties with Mr. Woods are generally not sports-focused, but rather relied on the athlete's image to sell unrelated products and services. AT&T did not use Mr. Woods' image in its major ad campaigns, but instead branded his golf bag with its logo. The corporation also sponsors the AT&T National golf tournament, which raises money for the Tiger Woods Foundation, the golfer's charitable venture. As of yesterday evening, Mr. Woods's photo was still on the tournament website, and AT&T has said it will continue to sponsor the event.

On the other hand, sports giant Nike Inc. has been Mr. Woods's biggest corporate supporter during the past month, refusing to cut ties with him. Energy drink maker Gatorade recently discontinued a line of Woods-branded products, but claimed the decision to do so was made several months ago.

If the findings of the UC Davis researchers are accurate, it is the sports-related firms that have stood by Mr. Woods that have suffered the biggest loss: Nike, Gatorade and Electronic Arts, which produces the Tiger Woods PGA Tour Golf video game, experienced a 4.3-per-cent drop in stock value, they said. Accenture, which cut Mr. Woods loose, suffered no drop in value during the same period.

Mr. Knittel said a company such as Accenture doesn't do much for Mr. Woods's public image, so he likely used that bargaining power to work out a deal in which the company gives him most, if not all, of its profits from the branding, meaning the firm isn't much worse off financially without the star.

Firms such as Nike, however, help bolster the Tiger Woods image, he said. 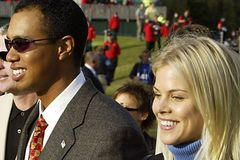 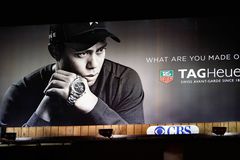