There are costs attached to what Bank of Nova Scotia calculates is the $200-billion in housing wealth created in Canada over the past year.

Among those costs are the fast erosion of affordability and the build-up in household debt to the point that it’s now one of the most worrisome in the world.

The benefits, too, are clear: Anyone who happens to own a home, particularly in Vancouver and Toronto, are growing richer with every transaction in those inflated markets.

1. As a simple investment, it ain’t bad, particularly if you live in Vancouver or Toronto or any of the regions surrounding them. Indeed, says Scotiabank’s Adrienne Warren, rising prices have pumped up homeowner wealth by $200-billion in the past year alone. 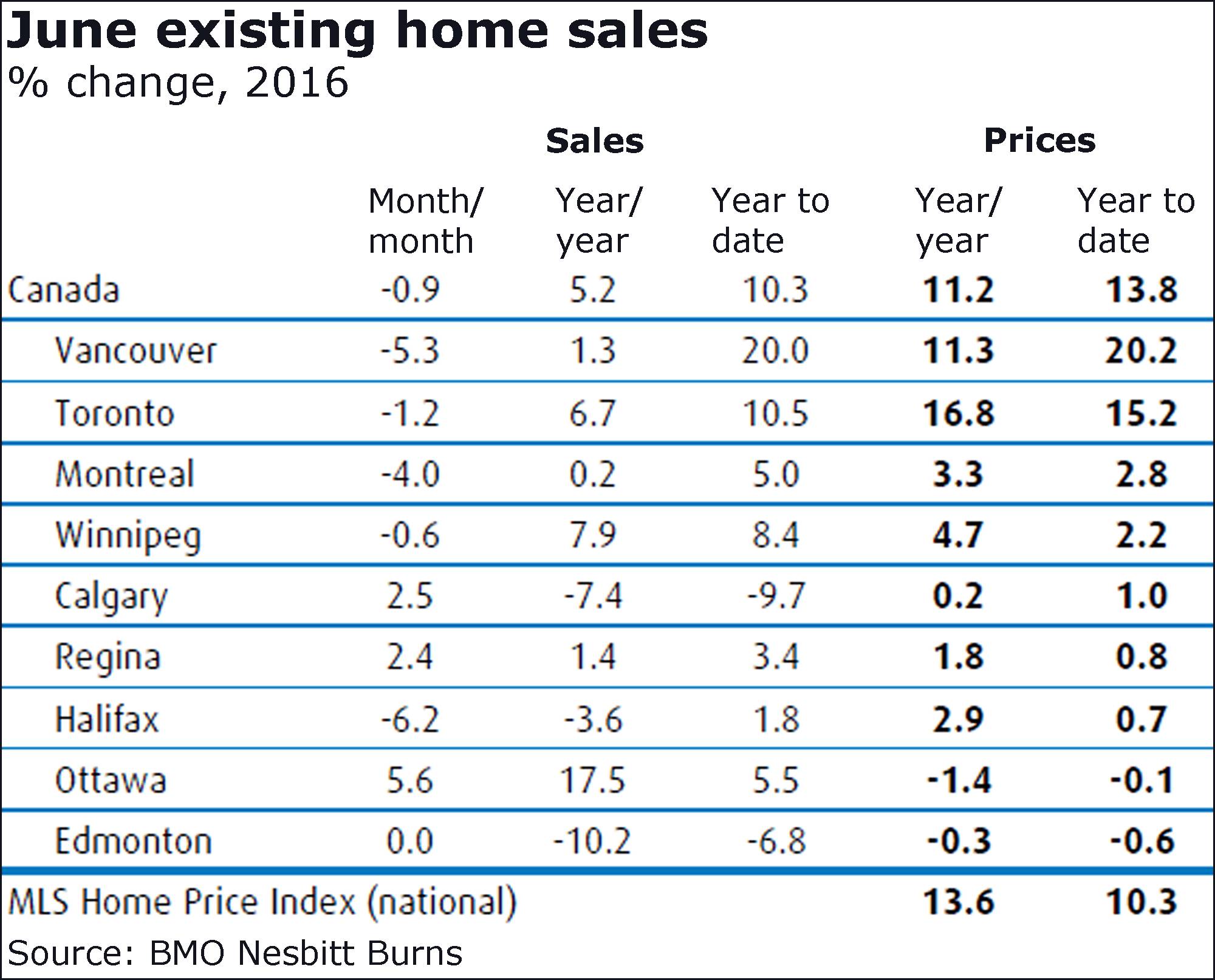 Here’s another way of looking at it, from BMO Nesbitt Burns chief economist Douglas Porter:

The average resale price across Canada climbed by $50,610 in June from a year earlier. Compare that to his calculation of annual pay levels – just shy of $50,000 – based on average weekly earnings.

And that’s the Canadian average for home prices, so consider what Vancouver and Toronto were bringing in.

2. Realtors are getting richer by the day. I have no problem with that – I wish I could get rich, and I guess I am because I own a house in Toronto – but, please, not on the backs of people who God-knows-when will ever be able to buy their first homes.

1. The biggies, of course, are swollen household debts and the fear of a bubble popping so loudly it will be heard across the country.

This is the biggest threat to the economy, and one that has caught the eye of the Bank of Canada and the regulator of commercial banks.

Many observers have taken a stab at this, all of them flagging concerns. The latest, a recent report from Capital Economics, puts Canada, Australia, the Netherlands and Sweden in the very naughty camp for consumer debt.

“Rising household debt in these countries has gone hand-in-hand with large increases in the cost of housing,” said the group’s global economist, Michael Pearce, noting that home prices are now “historically high” compared to incomes. 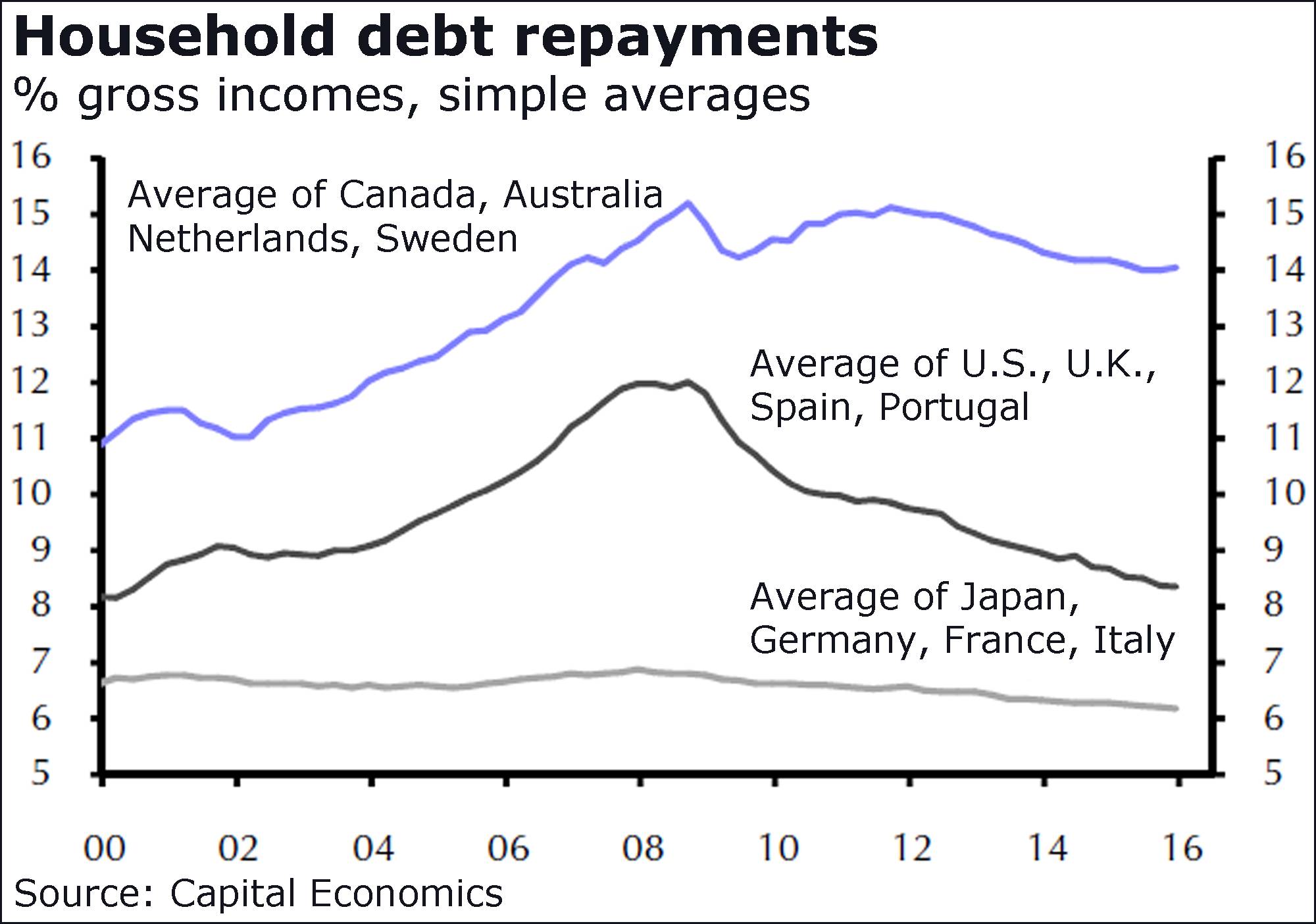 “The risk is that, if house prices begin to fall, households will be forced to cut back spending to repay debt and that defaults will rise as households fall into negative equity,” Mr. Pearce added.

“The risks are perhaps greatest in Canada where there is evidence that looser lending practices, including issuing mortgages with very long amortization periods and with high loan-to-income ratios, are driving recent increases in housing demand.”

But you can at least take some comfort from this: “The growing debt burden in the final group of economies is in some cases unlikely to end well, but the implications for the global economy should be small.”

2. This comes down to affordability and the fact that our kids have been priced out of the Vancouver and Toronto markets.

According to the latest measure by National Bank, affordability suffered again in those cities in the second quarter, based on mortgage payments as a percentage of income, or MPPI, for a representative home with a five-year term and 25-year amortization. 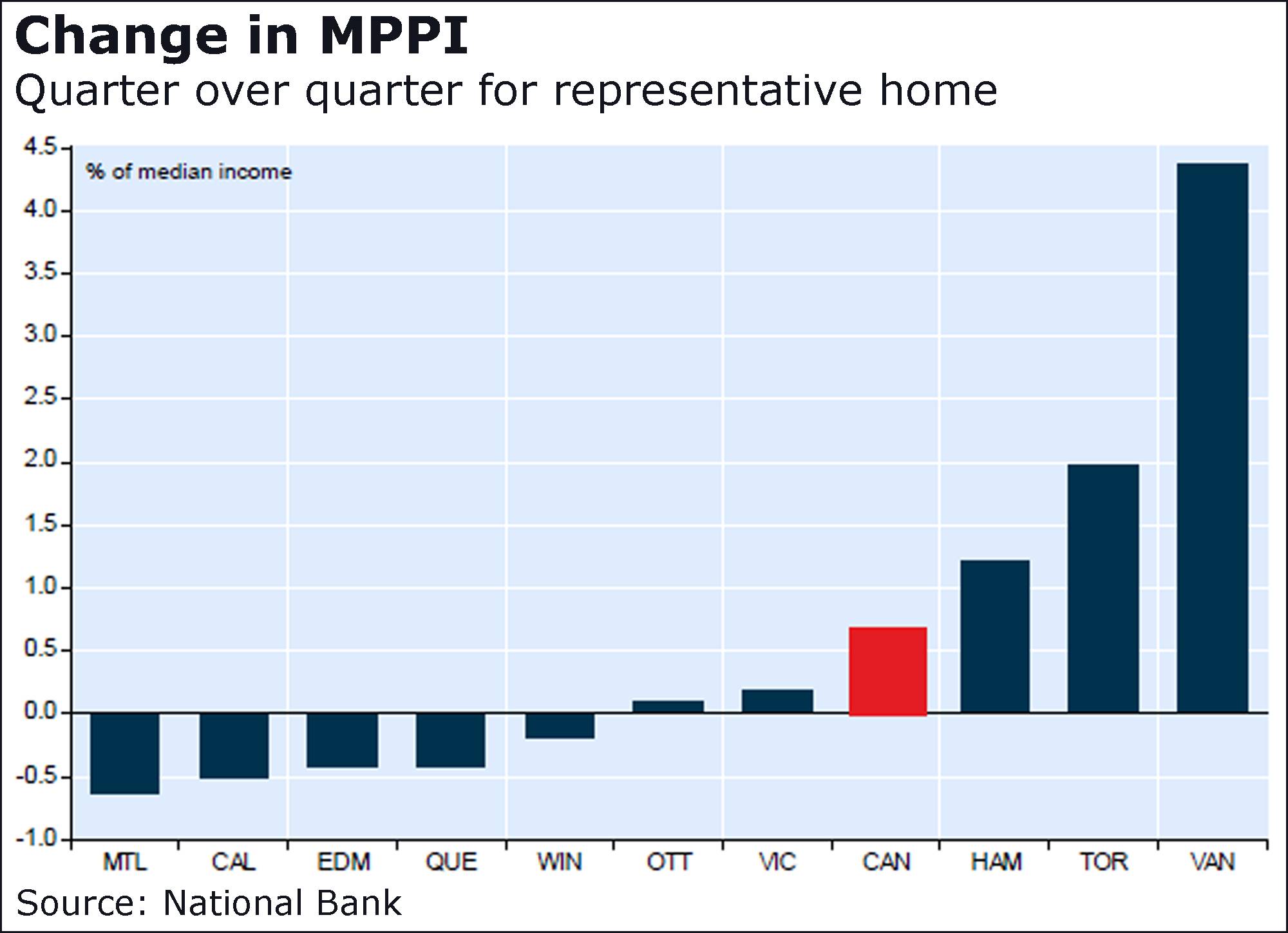 “The number of months required to accumulate a down payment on a representative home at a savings rate of 10 per cent was 34.9, versus 32.6 months a year earlier,” National Bank’s Matthieu Arseneau and Kyle Dahms said of Canada’s overall market, which certainly isn’t bad.

But “in Vancouver, for a non-condo dwelling, it reached 403 months, which is almost 34 years.”

Vancouver and Toronto, they said, are now “less affordable than at any time since the early 1990s.”

2. There’s a lot at play here, including the strong employment gains in Vancouver and Toronto. But also apparently at play are foreign capital and speculation.

The price gains have been luring foreign buyers, whose money is believed to be helping drive costs higher still, something that’s keeping B.C.’s Finance Minister up at night.

There’s little in the way of hard numbers, but BMO’s Mr. Porter looked at home prices and borrowing, and found this:

“Note that home prices tend to ebb and flow very closely to overall household-credit growth,” Mr. Porter said, though there were obvious differences during the global financial crisis.

“If anything, home prices have tended to grow slightly slower than credit growth over time,” Mr. Porter said.

“But look at what has transpired in the past year – prices have absolutely surged, while credit growth has barely budged,” he added.

“Something besides domestic borrowing has clearly fanned the flames. We will simply note the anecdotal evidence that many foreign buyers do not borrow to buy.”

There’s also speculation – and homes sitting empty while those waiting to make a killing sit it out – and what the Bank of Canada says are “self-reinforcing expectations.”

“ARM will be an excellent strategic fit within the SoftBank group as we invest to capture the very significant opportunities provided by the ‘Internet of things,’” said chief executive officer Masayoshi Son.

“It would not be surprising to see other bids for U.K. firms that have now become dheapter thanks to the fall in sterling, so the ARM deal could simply be the first in a procession of deals,” said IG senior market analyst Chris Beauchamp.

“It won’t be an ugly rush since ongoing political uncertainty will make it even more important for acquisitive firms to pick their targets carefully, and questions will linger over just how protectionist the U.K. may become with regards to some of its prized assets.”

Global markets are mixed so far, with New York poised for a stronger open at this point.

“The failure of the coup, and a reassertion of Turkish government control appear to have allayed concerns of rising geopolitical risk on Europe’s border,” said CMC Markets analyst Jasper Lawler.

Tokyo’s Nikkei was closed, and Hong Kong’s Hang Seng gained 0.7 per cent, while the Shanghai composite lost 0.4 per cent.

New York futures were up.

“From an investor point of view, the chaotic situation in Turkey will further damage revenues from tourism and could trigger a new wave of capital outflows in foreign investments in the very near term,” said London Capital Group senior market analyst Ipek Ozkardeskaya.