Homeowners and potential buyers in Ontario’s Golden Horseshoe are suddenly in uncharted waters.

And with that comes risk, economists warn.

Home prices are surging in the southwestern Ontario area that takes in Toronto, Durham and Niagara regions and communities in between such as Oakville, Burlington, Hamilton, Guelph, Kitchener-Waterloo, Barrie, Brantford and others.

As The Globe and Mail’s Brent Jang reports, Toronto’s housing market has been surging for some time, with the effects spilling over into those surrounding areas as buyers search for less expensive properties.

Which is why, according to the Canadian Real Estate Association this week, average prices in Niagara soared by more than 26 per cent in October from a year earlier, and in the Hamilton-Burlington area by more than 16 per cent.

Noting this, BMO Nesbitt Burns senior economist Sal Guatieri warned of a riskier environment depending on how things play out.

“Accelerating prices in Toronto and its surrounding areas will only increase the chance of a correction if interest rates rise too sharply … and the chance of that happening is now somewhat higher under a new U.S. president,” Mr. Guatieri said.

He was referring to the fact that bond yields, to which mortgage rates are tied, have been rising since Donald Trump won the U.S. election last week, promising what is expected to be a more inflationary environment.

The supply of homes for sale is drying up across the Golden Horseshoe, which the realtors group said Tuesday is “without precedent.”

There’s a key measure used by the industry, the number of months of inventory, which represents how long it would take to sell all homes for sale given the current pace.

In many of the southern Ontario markets, that now stands at between one and two, compared to 4.5 months nationally, which itself marks an almost seven-year low.

It’s less than one month in Durham region, Mississauga, Orangeville, Cambridge and Guelph.

Economists believe Toronto’s housing market will ease, though not slump outright, amid new mortgage and tax rules from the federal government.

Toronto-Dominion Bank economist Diana Petramala said this week, for example, that she expects price gains in Toronto to slow next year to between 2 and 4 per cent, a far cry from what we’ve been seeing. 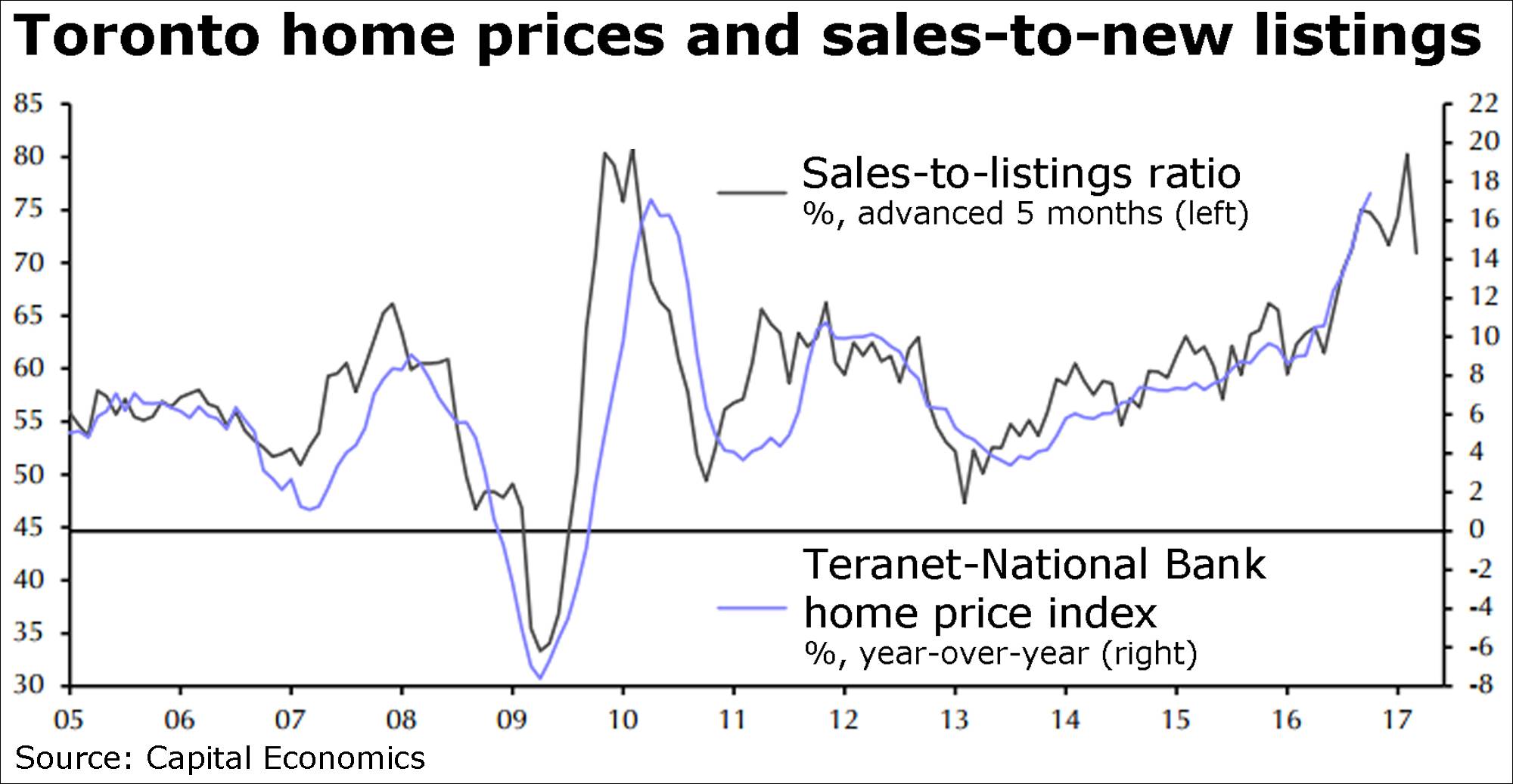 But for now, for what it’s worth (and it’s worth a lot), David Madani of Capital Economics believes annual house price gains in Toronto will hit a record 20 per cent by early 2017, based on the ratio of home sales to new listings.

That’s at this point. There are still mortgage rates to consider, as already noted.

It’s early in the game yet but, as The Globe and Mail’s Tim Kiladze reports, Royal Bank of Canada has already raised some fixed mortgage rates.

“The bond market selloff that ensued from the election results on Nov. 8 has led to a surge in bond yields including in Canada, which, if it were to continue, could put significant upward pressure on longer-term interest rates,” said RBC senior economist Robert Hogue.

“Any material rise in fixed mortgage rates resulting from such pressure likely would further harden the landing we expect for the market next year.”

Finance Minister Bill Morneau says Canada is ready to discuss difficult trade issues with the new U.S. administration, including softwood lumber and livestock, and he is confident of finding a “win-win” solution.

“We’ve been thinking about how we work with the next American administration for months, making sure that we’re prepared for those discussions. And we are,” Mr. Morneau said after speaking at the UBS European Conference in London, The Globe and Mail’s Paul Waldie reports.

When asked specifically about softwood lumber and so called country-of-origin labelling, which involve U.S. rules that require foreign beef and pork to be sold with stickers detailing its origin, Mr. Morneau said Canada is confident deals will be struck.

Canada’s manufacturers chalked up a fourth straight months of sales in September, with shipments rising 0.3 per cent.

That was largely on the back of stronger sales in the transportation equipment and fabricated metal industries, Statistics Canada said.

Shipments rose in 12 of 21 industries measured, accounting for about 70 per cent of the sector, though volumes actually dipped.