Simone Biles’s sponsors, including Athleta and Visa, are lauding her decision to put her mental health first and withdraw from the gymnastics team competition during the Olympics.

It’s the latest example of sponsors praising athletes who are increasingly open about mental health issues. Tennis star Naomi Osaka found widespread support when she withdrew from the French Open earlier this year.

Biles could still compete in other gymnastic events during the Olympics. She also has a solid history of gymnastic accomplishments, including four gold medals and a bronze medal at the 2016 Olympics. She has earned five more all-around titles in world championships since 2013. That earns the 24-year-old a lasting athletic legacy that sponsors can capitalize on.

“We are past the time when athletes like Simone are valued simply for their athletic prowess,” said Jim Andrews, founder of A-Mark Partnership Strategies. “She has earned a place in gymnastics history, and has proven herself to be an amazing spokesperson and influencer who has much to offer brands even without competing and eventually in retirement.”

Tokyo Olympics twist: Simone Biles’s legacy may be her courage to look after herself, not the IOC

Biles split with long-time sponsor Nike in April to sign with Athleta, the athletic clothing arm of Gap. Biles’s deal with Athleta also includes sponsorship of the Gold Over America victory tour later this year, which will star her as well as other USA Gymnastics team members.

At the time, Biles said she signed with Athleta over Nike because she wanted to be aligned with a brand more reflective of her values.

“I feel like they work very closely with women and girls and letting them have a voice and kind of breaking those beauty standards,” Biles said in May.

Biles launched her first ad campaign with Athleta in June, including a video that showcases the people that have supported her through her rise to superstardom.

Athleta put out a statement in support of Biles after her withdrawal in Tokyo.

“We stand by Simone and support her well-being both in and out of competition,” Athleta said. “Being the best also means knowing how to take care of yourself. We are inspired by her leadership today and are behind her every step of the way.”

Visa put out a similar statement, calling her decision “incredibly brave.” Nabisco said Biles is an “inspiration to us all.” Core Power, a protein shake maker, said Biles is “showing us all that her courage and strength extend well beyond the mat.”

Dropping support of Biles would hurt a brand more than it would help, said David Carter, sports business professor at the University of Southern California, and founder of marketing consultancy Sports Business Group.

“Given the fluidity and high-profile nature of the situation, as well as the sensitivities associated with her reasoning behind withdrawing, sponsors must be very careful not to be perceived as cutting and running,” he said. “Doing so would not only draw the ire of many consumers who staunchly support Biles, but also future athletes contemplating marketing relationships with any brands deemed tone deaf to the circumstances involved.” 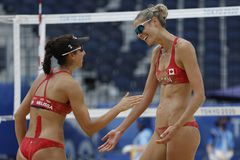 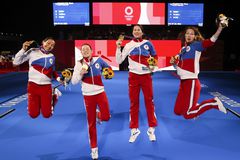 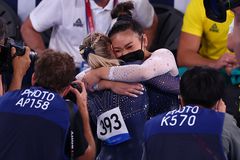