They came in a steady stream, looking weary and confused as they made their way through the train station in Przemysl, a small Polish city about 10 kilometres from the border with Ukraine. Some had come from Kyiv, others from Lviv, in western Ukraine, and still more from farther east.

“It’s very terrible in Ukraine,” Anastasia said as she held her 14-month-old son. They left Lviv in the morning, shortly after air raid sirens screamed warnings of a Russian attack. “We could not last in Ukraine in this situation.” Her plan was to stay briefly somewhere in Przemysl, then head to friends in Krakow. “And after, I don’t know.”

Olgah Martynyuk, a history professor at Kyiv’s Polytechnic Institute, made a mad rush for the train after hearing bombs drop around the capital Thursday morning. “I woke up from blasts in the morning and I packed up,” Prof. Martynyuk said as she sat in Przemysl’s train station after a 14-hour journey. She was happy to be safe but felt unsettled about leaving her country. “I still feel enormous guilt,” she said. “What did we do wrong that all of this is happening?”

Olgah Martynyuk, a history professor at the Kyiv Polytechnic Institute, who left the city this morning by train to Przemysl, Poland. She’s speaking in a reception centre set up in the train station after her 14-hour journey.

Poland has been bracing for months for the possibility of as many as one million refugees from Ukraine in the wake of a Russian invasion. Preparations have been slow to roll out, and on Thursday officials in Przemysl, the Polish city closest to the border, still appeared to be scrambling to come up with some kind of support structure.

On Thursday night the train station was expecting as many as 2,000 refugees to arrive on two trains from Kyiv early Friday morning. But just two local officials were on hand to help. “I’m afraid that we will lose control,” one said.

A makeshift reception centre in the train station had been set up, and by late evening some hot soup, tea and coffee were on offer.

“All the people here left Ukraine today or yesterday and they are looking for a safe place,” Przemysl Mayor Wojciech Bakun said as he toured the centre. “We are just here to help all the people to reach their destination.”

Mr. Bakun expected that most people would likely move on to other cities in Poland. But he said Przemysl had 2,500 beds ready in shelters for those who had nowhere else to go, and officials would be offering medical help. The national government has said eight similar reception centres will be set up in other parts of the country.

A group of 20 volunteers from the Ukrainian community centre were also on hand at the train station, providing translation and arranging buses. They had also set up a shelter at Ukraine House and a local Ukrainian school. “We wanted to do something,” said one of the volunteers, Tatiana Nakoneiczna. “This is just the first wave. There will more tomorrow and on and on.”

The refugees began to arrive early Thursday, walking across the border at Medyka, a few kilometres east of Przemysl.

Vitali Koval and his family were among the first to arrive. He and his wife, Oleksandra, had quickly stuffed three big suitcases for themselves and their children, five-year-old Alisa and three-year-old Eleonora. They jumped in a cab in Lviv, headed for the Polish border and walked the last short stretch across the boundary, pulling their bags along the highway.

“There is a big queue of cars on that side,” Mr. Koval said as he pointed across to Ukraine. “There are huge queues at petrol stations and in the markets. People are buying rice or pasta or something.”

The family relocated to Lviv from Kyiv a few days ago and now hope to stay with friends in Poland until they can figure out what to do next.

“We will need some help,” Mr. Koval said as he rushed off to buy some food and water at a nearby grocery store.

While the numbers of refugees were still small, the fear and anxiety among the arrivals was real.

“We heard many shots,” said Vlad Slovak, who fled the small city of Boryslav, about 100 kilometres from the Polish border, with his father and sister. “It was so scary.” They have relatives in Chicago and hope to make it there eventually.

Mr. Slovak held up a video taken by one of his neighbours that showed explosions and fires. While they didn’t hear the shelling, they saw black smoke from what they believed were bombs.

“I got up at 5, heard about the bombing, and that was it,” said Mr. Slovak’s father, Roman. “We got in the car and came here. We left the car with a friend and walked across.” Then he shouted an expletive at Russian President Vladimir Putin.

Video shot in Boryslav, Ukraine, shows a missile moments before an explosion on Feb. 24, and another blast in the distance. Boryslav is southwest of Lviv and northwest of Ivano-Frankivsk, a town where more explosions were reported in the initial invasion. 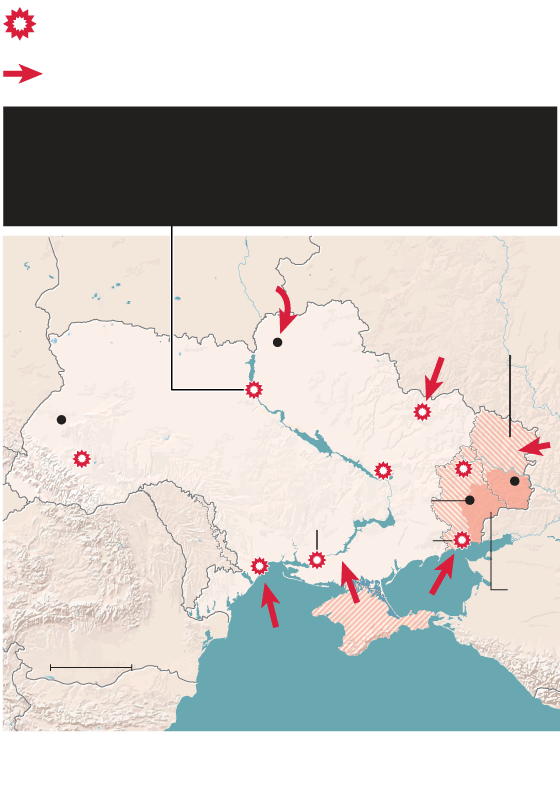 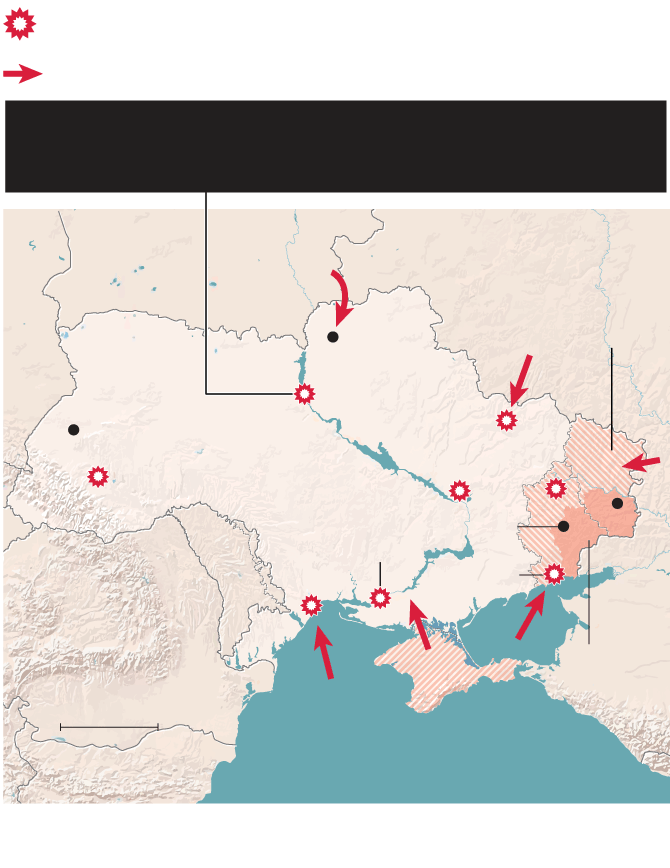 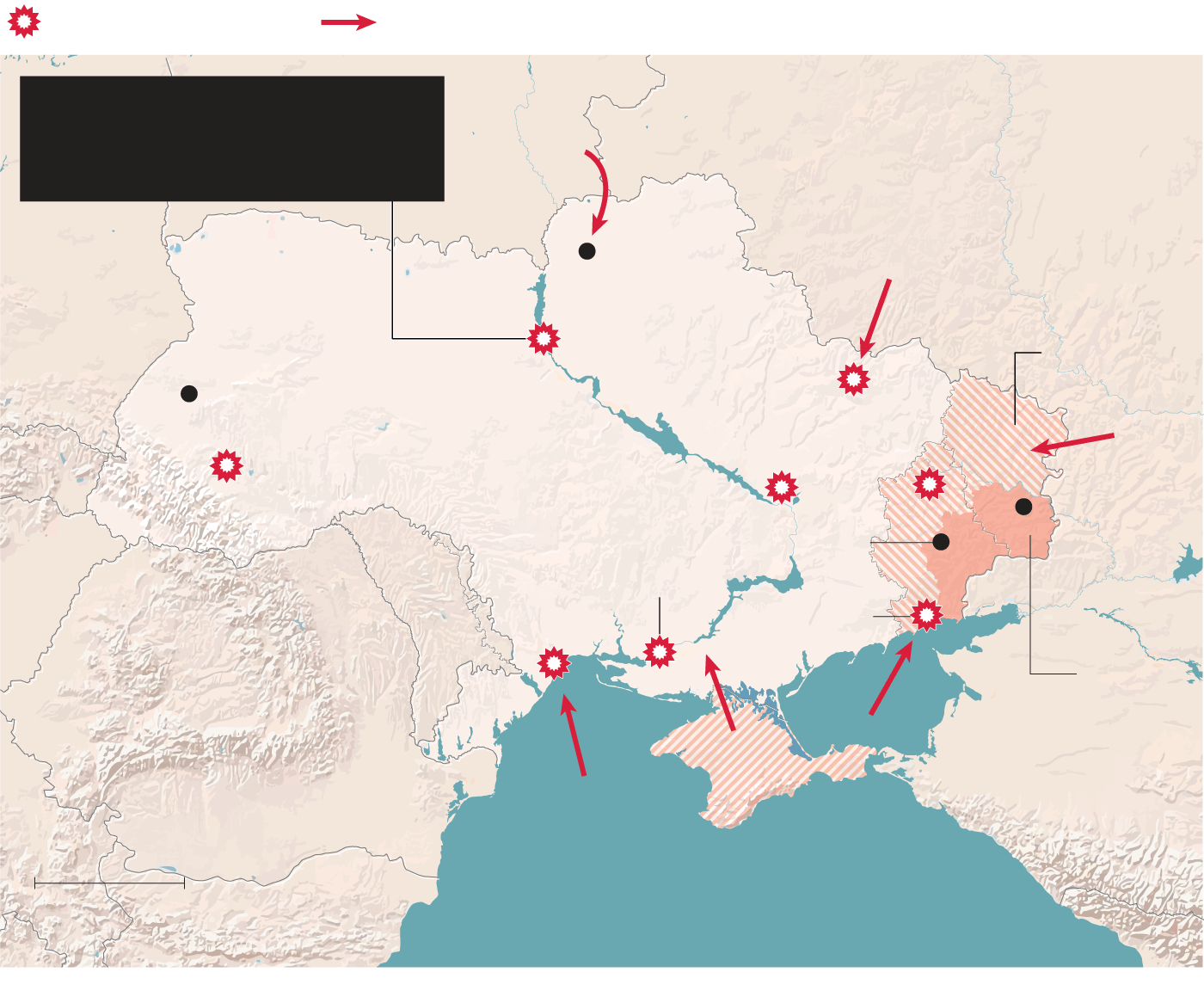 Danylo Pikko left his village, Sambor, which is about five kilometres from the border. He saw smoke billowing up from a local military base and rushed out the door with his bag. He, too, got a ride to the border and walked across. “I don’t know what I’ll do now,” he said.

Others took a defiant stand and vowed to return to Ukraine one day to fight. “We’re not afraid of this attack,” said Sofia Makhnyut, a 21-year-old university student from Lviv who studies in Poland. She’d been planning to return to school soon but decided to go on Thursday because of the bombing, fearing the border would close.

She and her friends said they were determined to return to Ukraine and take up arms if necessary. “This is a panic, yes, this is a fear, yes. But we can fight for our country because this is my city. Why must I give someone who are terrorists my city or my country? This is my country.”

For some people, the decision to leave was wrenching. They left family members behind who didn’t know what to do.

“My parents don’t want to leave,” said Yaryna, a 22-year-old from Lviv who declined to give her last name. “They have everything there. They don’t know what to do abroad. They have a job there, a house, so they are not ready to leave. And they hope for the best.”

When asked if she thought she’d have a country to return to, Yaryna replied: “I don’t know what to think right now. I am worried about my family.”

Przemysl is home to about 2,500 Ukrainians, a small fraction of the city’s 60,000 residents. And they have not always been welcome. Most, like Katarzyna Komar, are the descendants of thousands of Ukrainians who were forced by the Soviets after the Second World War to relocate from Przemysl to other parts of Poland. Ms. Komar’s mother and grandmother were among those who had to leave, but she returned four years ago because “this is where my family comes from. This is home.”

It hasn’t been easy. There have been violent clashes over the years between Ukrainians and local Polish nationalists who harbour historic resentments over atrocities committed by Ukrainians during the Second World War.

Local activist Anna Grad-Mizgala has been working to improve relations between the communities and is hoping the war in Ukraine will bring the city together. She is organizing a rally in support of Ukraine on Saturday. “We are fighting for life and for freedom,” she said.

In Odessa, Katerina Balyutova left her home within half an hour of the 5 a.m. initial strikes Thursday and drove toward Lviv.

But as Russian air attacks hit targets across the country, including less than 300 kilometres from Odessa, Ms. Balyutova reached a military roadblock near the site where an army depot was rocked by huge explosions.

Other obstacles to the exodus arose quickly. Across Ukraine, long lines formed at gas stations, some stretching for hundreds of metres. People also queued at foreign exchange shops and ATMs, some of which had run out of money. By early afternoon, some gas stations began to block their entrances after running out of fuel.

Those who could travel passed a landscape of jarring paradoxes: the percussive sound of explosions, workers tending vineyards, a column of tanks clattering down a city street, swans circling in a pond, cars bouncing across muddy potholes.

And roads already rendered impassable by war. When Ms. Balyutova reached the roadblock, she turned around, abandoning her flight – for the time being.

It’s possible that Russian forces will attempt to take Odessa by sea, she said. She was determined to provide help in any way she could to Ukrainian fighters defending her home, joining a countrywide rush of volunteers that have created lines at blood donation centres and military recruiting offices.

“This is our war,” Ms. Balyutova said. “We will stay in Ukraine – and we will take this war.”

Russia invades Ukraine: More from The Globe and Mail

The invasion in photos

Why is Russia invading Ukraine? What Putin’s troops have done so far in Donbas and beyond

‘Ukrainian people want peace,’ President says in address to the country ahead of Russian assault

Biden touts ‘first tranche’ of sanctions against Russia as toughest measures yet. How effective are they?

Doug Saunders: Putin’s fictions endanger all of us in ex-colonies