Russia has suffered a major diplomatic defeat at the United Nations, losing a vote at the General Assembly by an overwhelming margin of 141 to 5 after an emergency debate mobilized a surge of support for a resolution condemning the Russian invasion of Ukraine.

Diplomats jumped to their feet and applauded loudly when the vote results were displayed on a screen. Just four countries – North Korea, Syria, Belarus and Eritrea – voted with Russia to oppose the resolution, while 35 abstained.

The resolution demands that Russia immediately halt its invasion and completely withdraw all its forces unconditionally from Ukraine. The resolution “deplores in the strongest terms” the Russian aggression. It also condemns Russia’s decision to increase the readiness of its nuclear forces.

“The message of the General Assembly is loud and clear,” UN Secretary-General Antonio Guterres told journalists after the vote on Wednesday. “End hostilities in Ukraine – now. Silence the guns – now. Open the door to dialogue and diplomacy – now.”

The vote shows that the world wants an end to the “tremendous human suffering” in Ukraine, he said. “We don’t have a moment to lose. The brutal effects of the conflict are plain to see. As bad as the situation is for the people of Ukraine right now, it threatens to get much, much worse. The ticking clock is a time bomb.”

The resolution was approved by a larger margin than expected in the 193-member General Assembly, where all of the world’s countries are represented. It needed two-thirds support from the voting members to win approval.

Overwhelming vote in favour of #UnitingForPeace - now we must pursue peace with justice, accountability and no impunity, and humanitarian assistance to those displaced by the war. #PutinsWar must end. https://t.co/t0vqLGuTSc

In a similar vote in 2014 after Russia annexed the Crimean territory from Ukraine, a resolution condemning Moscow’s actions was supported by far fewer countries: 100 of the UN’s member states.

Bob Rae, Canada’s ambassador to the UN, said the vote was an overwhelming result. “Now we must pursue peace with justice, accountability and no impunity, and humanitarian assistance to those displaced by the war,” Mr. Rae said in a tweet after the vote. “Putin’s war must end.”

JUST IN: By a vote of 141 to 5, the @UN General Assembly—that’s every country in the world—has overwhelmingly voted in solidarity with Ukraine, demanding Russia end its brutal invasion.

Even some of President Vladimir Putin’s staunchest diplomatic friends were unwilling to support Russia in the vote. Some abstained, including Cuba, Nicaragua and Iran. Others, such as Serbia and Brazil, supported the resolution.

“This is a global rebuke of historic proportions,” said Samantha Power, administrator of the U.S. international development agency and a former U.S. ambassador to the UN.

“Putin is isolated to an unprecedented degree,” she said. “Even his long-standing partners are condemning this invasion.”

The General Assembly held the emergency debate under a rarely invoked clause that allowed it to hold a vote if the UN Security Council’s five permanent members failed to reach an agreement on an issue.

Since the beginning of the war, Russia has wielded its veto power at the Security Council to block any resolution against its Ukraine invasion, so the council referred the issue to the General Assembly for a vote.

Linda Thomas-Greenfield, the U.S. ambassador to the UN, said the vote showed that the world is united. “Light has won over darkness,” she told journalists. “The vast majority of the world has condemned Russia’s unprovoked, unjustified, unconscionable war. We have demonstrated that Russia is isolated and alone.”

There was a similar gesture on Tuesday when more than 140 diplomats walked out of a room in Geneva, Switzerland, when Russian Foreign Minister Sergei Lavrov was due to speak by video link to the UN Human Rights Council. Only a small handful of diplomats remained to hear him speak. 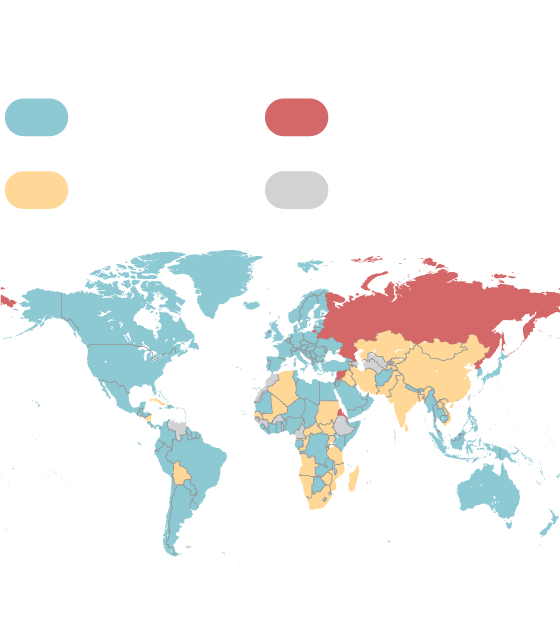 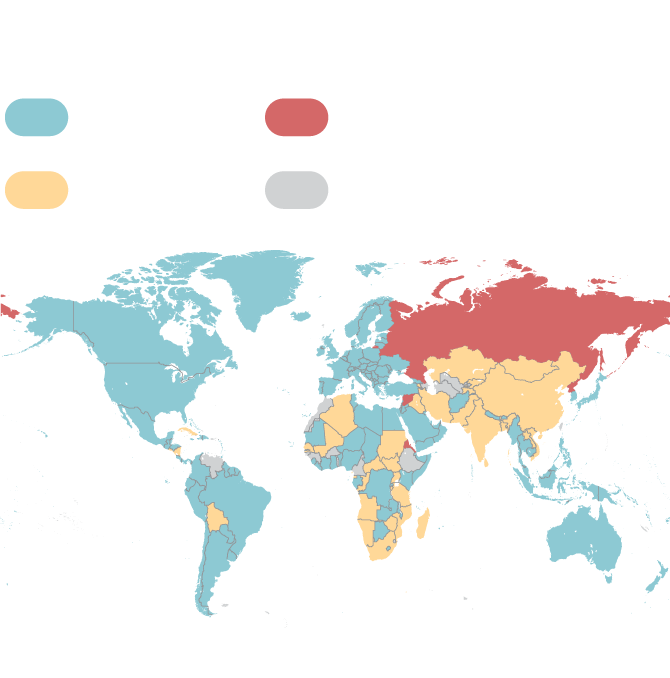 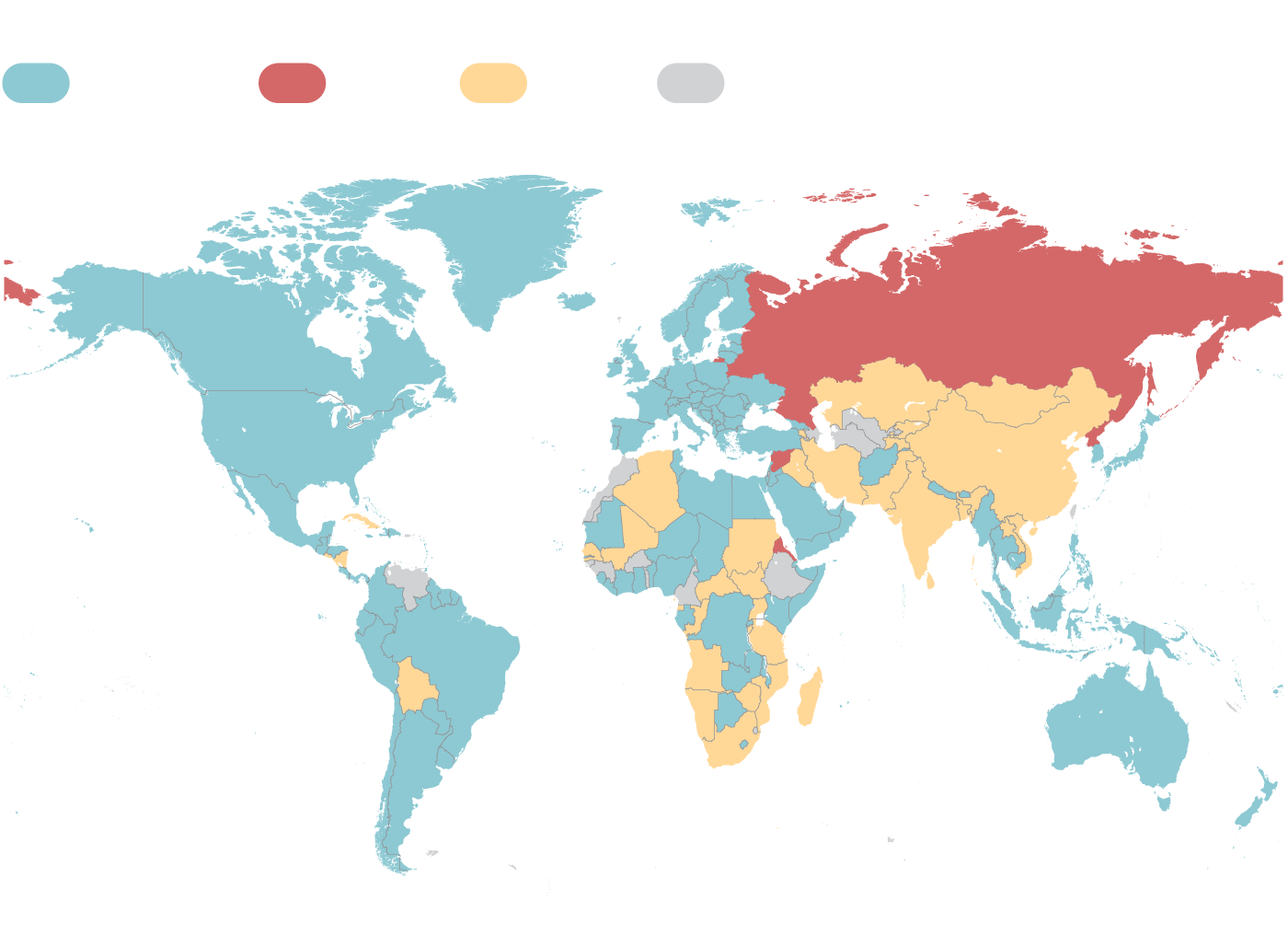 The dozens of abstentions at the General Assembly, however, showed that many countries are still unwilling to condemn Russia’s invasion of Ukraine. Among the abstentions were China, India, Pakistan and 17 African countries, including South Africa.

Another dozen countries did not participate in the vote, for unclear reasons. Some were traditional Russian allies, such as Ethiopia, that might have wanted to avoid any connection to a vote criticizing Moscow.

The abstentions by key powers such as India and China in the UN General Assembly were a signal that Russia still retains some level of tacit support from countries that remain reluctant to criticize it – largely for reasons of economic or military links.

“India is the world’s biggest arms importer, and it is dependent on Russia,” said Sanjay Ruparelia, the Jarislowsky Democracy Chair at Ryerson University in Toronto.

“Its reliance is even greater in the realm of tanks, fighter jets and submarines. All of these require maintenance, spare parts, etc.”

Despite attempts to diversify its arms suppliers, India still feels a strong need for Russian weaponry after a series of violent clashes with China on the Sino-Indian border, Mr. Ruparelia told The Globe and Mail.

Several African countries – including Sudan, Mali, Algeria, Uganda and Central African Republic – have become reliant on Russian military supplies or mercenary forces, which may have influenced their decisions to abstain in the vote on Wednesday. Thousands of Russian mercenaries are active in Mali, Sudan and CAR.

One of Sudan’s most powerful officials, General Mohamed Hamdan Dagalo, has been in Moscow for most of the past week on a mission to seek help from Russian leaders. Sudan’s military-dominated government has been desperate for an economic bailout and political support, at a time when it is under heavy pressure from Western governments and street demonstrators to move to civilian rule, and it sees Russia as one of the most likely sources.