Joe Biden predicted he will carry all four outstanding swing states in the U.S. presidential election, calling for calm and conciliation even as Donald Trump continued to threaten legal action to stop counting or invalidate votes.

The Democratic former vice-president overtook the Republican incumbent in the vote counts in both Pennsylvania and Georgia Friday, while holding onto his leads in Arizona and Nevada.

To pass the threshold of 270 Electoral College votes necessary to win, Mr. Biden would have to carry either Pennsylvania or any two of the other three states. But as the counting proceeded at a glacial pace, it was unclear when exactly the winner would be known.

U.S. election live updates: The latest news on the race to 270

By late evening, Pennsylvania still had tens of thousands of votes left to count and Arizona had roughly 200,000. Georgia was nearly finished, but officials there said Mr. Biden’s lead of just a few thousand votes was so small that it would likely need a recount. Nevada expected to be nearly finished counting by Sunday.

Early in the day, when it seemed Mr. Biden might lock down Pennsylvania at any minute, he planned a prime-time speech. But by the time he finally took the stage in his home state of Delaware at 11 pm ET, the tally was still far from complete.

“We don’t have a final declaration of victory yet, but the numbers tell a clear and convincing story: We are going to win this race,” Mr. Biden said, flanked by his vice-presidential running mate Kamala Harris.

Mr. Biden acknowledged it was “numbing” to watch the slow drip of results on television, but urged supporters to “remain calm, patient.” And, without naming Mr. Trump, he vowed to fight back against any effort to discard votes.

“Your vote will be counted. I don’t care how hard people try to stop it. I will not let it happen,” he said.

He also called for the country to come together and tamp down its partisan fighting.

The speech was an effort to set a contrasting tone with Mr. Trump’s repeated denunciations of the election as “stolen” and “rigged,” which he made at a White House briefing the previous evening, and continued Friday on Twitter.

Mr. Trump claimed that there had been “ILLEGAL VOTES” cast in the election and said his poll watchers, who were stationed inside counting centres to watch the process “were not allowed" to work. Matt Morgan, a lawyer for Mr. Trump’s campaign, also claimed that ballots in Georgia had been “harvested,” or returned by people who did not fill them out, and that people in Nevada had “improperly” voted by mail.

The President’s campaign did not provide evidence to substantiate his accusations of a wide-ranging conspiracy to deny him an election victory.

“I had such a big lead in all of these states late into election night, only to see the leads miraculously disappear as the days went by," Mr. Trump tweeted.

In some states, such as Pennsylvania, Michigan and Wisconsin, Republican legislators would not allow elections officials to begin processing mail-in ballots until election day. It takes longer to process mail-in votes than in-person ones because postal ballots require verifying voter information on an outer envelope before counting the votes inside.

Mr. Biden’s campaign dismissed the President’s moves. It expressed confidence that, should Mr. Trump refuse to accept a victory by Mr. Biden, he would not be able to cling to office.

“The American people will decide this election. And the United States government is perfectly capable of escorting trespassers out of the White House,” Andrew Bates, a spokesman for Mr. Biden, said in a statement.

The President’s supporters and protestors gathered at vote-counting locations in the states at play.

Several chanted “watch the water,” a reference to a debunked conspiracy theory spreading through online group QAnon that claimed the Trump administration applied watermarks to ballots in order to track fraudulent votes.

Adriana Micciulla, 59, who runs a dog-watching business in Scottsdale, said she believed that Mr. Biden had become competitive in traditionally Republican Arizona because of illegal activity with the technology used to count votes.

“First of all, it’s the algorithms, the computers. They definitely use algorithms because you’re talking about millions of votes,” she said. “Then it’s the actual dishonest people on the Democrat side. They have enough of them in every camp, in every county and state.”

Republican officials are inside the counting hall in Phoenix and have not reported any fraud with the voting equipment.

Adel Belgaied told the crowd over a megaphone that he would ask the local Republican Party to bring legal officials to the site to help protesters fill out affidavits alleging irregularities with their votes in hopes of forcing an audit or recount. “This isn’t ending. This is just starting,” he said.

In Philadelphia, meanwhile, anti-Trump protesters outnumbered the President’s supporters on the streets around the Pennsylvania Convention Center where the votes that gave Mr. Biden his lead Friday were counted.

The protesters brought a P.A. system and DJ, and danced in the street for hours. Police on bicycles formed a cordon between them and a smaller group of people waving Trump flags and blasting Kid Rock songs.

Investors focus on undecided Senate as Biden edges in on presidency
November 6, 2020 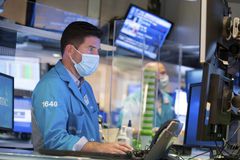 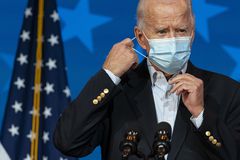 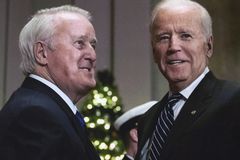