Remember when the biggest worry people had about the Academy Awards was who would host the dang thing? Oh, for those halcyon days. Kicking off with Regina King strutting through L.A.’s Union Station like she was starring in Ocean’s 14 and culminating with Nomadland taking home the award for best picture (which was bizarrely handed out before best actress and best actor), the 93rd Academy Awards offered plenty of surreal spectacle, deserved triumph and questionable decision-making. Here are the highs, lows and many weird moments in-between that made Sunday night one for the record books.

Ahead of Sunday’s broadcast, producers Steven Soderbergh, Stacey Sher and Jesse Collins hinted that the evening would look more like a three-act movie than a gala celebrating movies. No one seemed quite sure how that would work, but apparently it means shooting on 24-frames-per-second film; running bouncy retro-chic opening credits that would be at home during Soderbergh’s own caper films; and featuring a standout lead performance from Regina King, who kicked things off with a monologue that was equal parts heartfelt, celebratory and of-the-moment. The last two acts were a little unclear, but I admire the ambition.

It was half a sweep: while the best actress and best actor awards went to Hollywood veterans (Frances McDormand for Nomadland, Anthony Hopkins for The Father), the winners in the supporting acting categories (best supporting actor Daniel Kaluuya for Judas and the Black Messiah and best supporting actress Youn Yuh-jung for Minari) were performers of colour. While some commentators out there might be tempted to use this news as justification to retire the #OscarsSoWhite hashtag, let’s please wait and see what happens next year. And the year after that.

This Round’s on Thomas

One benefit of this year’s awards being forced to explore a non-traditional route: no orchestra playing off award winners. This particularly benefited Another Round director Thomas Vinterberg, who took home the Academy Award for Best International Film. In a lengthy, emotion-packed speech, the Danish filmmaker hat-tipped his leading man Mads Mikkelsen, admitted he’d always dreamed of winning an Oscar (interesting admission for one of the authors of the Dogme 95 minimalism movement) and dedicated the night to his late daughter, Ida, who died in a car accident days into filming. “We made this movie for her, as her monument,” Vinterberg said. “This is a miracle that just happened and you’re a part of this miracle. Maybe you’ve been pulling some strings somewhere, but this one’s for you.”

The new extra-long speech rule also helped best supporting actor winner Daniel Kaluuya (Judas and the Black Messiah), who in a sometimes poignant, sometimes rambling, always entertaining acceptance speech called out everyone in the room to continue fighting against racial injustice, hyped up his own party plans, and thanked his parents for having sex and thus ensuring his existence.

In yet another break from tradition, the Oscars gave out the best director award super-early … and in doing so made sure the evening was a record-setter just one hour in. Accepting her award, Nomadland’s Chloé Zhao became the first Asian woman to win that honour – and just the second woman to win the award at all, after The Hurt Locker’s Kathryn Bigelow. Recalling how she and her father would recite classic Chinese poems to each other during her childhood, including one that began with the words, “People at birth are inherently good,” the Beijing-born Zhao delivered a hopeful, humble message in her speech: “This is for anyone who has the faith and courage to hold onto the goodness of themselves, and the goodness of each other.”

Why relegate the Oscars’ traditionally biggest show-stoppers, the live performances of all the tunes nominated for best original song, to prerecorded bits aired during the preshow? Undoubtedly COVID protocols made such a move necessary, but I’m sure audiences who weren’t aware of the strategic move would have appreciated watching Molly Sandén’s rendition of Husavik (from Eurovision Song Contest: The Story of Fire Saga) during the actual gala. (I was hoping that this decision might’ve been made because Eurovision’s Jaja Ding Dong might’ve been saved for the real-deal gala, but no dice.)

Having the award presenters rhapsodize about the nominated work is a nice touch, but the decision to largely exclude footage of the actual films and performances is, if not a slap, then an annoying and unnecessary flick in the face of the nominees. This is an especially weird decision given that general awareness of this year’s films is at an all-time low. Maybe if home audiences actually saw a glimpse of the movies that were being celebrated, they’d be that much more inclined to check them out.

Glenn Close, But No Cigar

Minari’s Youn Yuh-Jung had every right to win the award for best supporting actress (and came with a killer acceptance speech, starting with the line, “Mr. Brad Pitt, finally. Nice to meet you. Where are you while we were filming?”) And if she hadn’t won, then I’d place Borat Subsequent Moviefilm sensation Maria Bakalova as the rightful runner-up. But it still must sting for Glenn Close to be denied Oscar glory … for the eighth time, tying Peter O’Toole’s unfortunate record. What’s worse: her forced participation in an alleged “comedy” bit toward the end of the show orchestrated by Lil Rel Howery in which the actor uttered the words, “Da Butt.”

Well, that was a surprise: Going into Sunday’s event, it seemed the late Chadwick Boseman (Ma Rainey’s Black Bottom) was a lock for best actor. Instead, The Father’s Anthony Hopkins swooped in … and I guess even Hopkins was expecting to lose, given he wasn’t on hand, even at one of the Academy’s satellite locations, to make an acceptance speech. Huh.

Panic at the Pre-Show

Maybe it was the fact I was watching from the cold, cruel, largely unvaccinated land of Toronto, but staring at beautiful celebrities – sometimes masked, sometimes not – mingling at L.A.’s Union Station under the California sun was a jarring experience. On the one hand, here’s hope that a normal world is just around the corner! And maybe even Carey Mulligan will be there to greet me! On the other: God, this was a cruel exercise for those who aren’t even allowed to get near cherry blossoms or tennis courts, let alone get dressed up for real-deal socialization.

The Academy of Motion Picture Arts and Sciences apparently employed an army of epidemiologists to help pull the evening together (glad they all had so much spare time), and most everyone in attendance was (from my understanding) vaccinated. All of which made the evening’s mask instructions, as delivered by King at the top of the show … peculiar. “When we’re rolling: mask off. When we’re not rolling: masks on.” So either the masks were a complete farce in the first place given current CDC guidelines, or COVID is only a thing during commercial breaks, or …??? But hey, I’m in a country where rapid tests still aren’t even a thing, so I defer to Hollywood’s handling of the situation.

The Academy Awards are a strange thing, I get it: a stage show broadcast on television celebrating movies that were this year mostly distributed online. But it would have been nice if the film industry decided to use its biggest platform of the year to acknowledge movie theatres. You know, the thing that has been an essential cog in the Hollywood machine since its beginning. Instead, viewers who turned in early enough got to see Matthew McConaughey give theatres a quick shout-out. Not alright, alright, alright. Not alright, alright, alright at all. Sure, Frances McDormand did her best to give a shout-out toward the end of the night, but by then it felt too little, too late.

Ever since 2014, when Netflix received its first Oscar nomination for the documentary The Square, the streaming giant has had its eyes trained on the big prize of the evening: best picture. Yet in a year where the streamer had the biggest advantage that the company could ever hope for, Netflix walked away from the Academy Awards once again denied ultimate satisfaction, with its big bets Mank and The Trial of the Chicago 7 missing out in favour of Nomadland. Although it did win a surprise best documentary award for My Octopus Teacher (making us all the suckers?), I guess the streamer can also take solace in the fact that many millions more people were surely streaming some random Netflix title Sunday night than watching the Oscars. 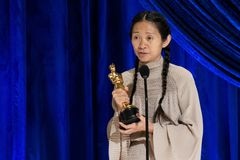