“I’ve never seen as many cars in the morning,” said Ms. Najar, who has been driving her daughter, now in Grade 1, to school since she was in kindergarten.

“There are parked cars, there are cars in front of the school, there are parents who are standing, who are walking with their children … Even when I pick her up after school, it’s horrible.”

Ms. Najar, who now parks in a nearby alley and walks the remaining distance with her daughter, suspects that a growing number of parents have chosen to drive or walk their children to class because of concerns surrounding school bus transportation during the COVID-19 pandemic.

The new class divides are defined by education, gender, age and geography

As school boards across the country begin welcoming their first students back to classes, advocates anticipating an increase in automobile traffic are urging parents to exercise caution to ensure school grounds remain safe for all.

Michaël Brochu, the Montreal police service’s road safety adviser, said he anticipates more parents and children will be using alternative modes of transportation, but that numbers detailing this growth will not be available until after the back-to-school season.

The road safety advice he is giving families is no different from that of previous years, “but it’s particularly important to [remind parents] this year, given the delay between the closure and reopening on schools.”

He says parents should leave their homes early to avoid last-minute traffic. Drivers should respect school loading and parking zones, and if those are full park in surrounding streets while remaining more than five metres away from intersections. Children should be dropped off and picked up on the school’s side of the road, and parents should avoid crossing in front of each other’s cars or making three-point turns to drop off their children.

The Ottawa Safety Council (OSC), the organization that manages the City of Ottawa’s crossing guard program, is also anticipating more vehicular traffic. The group has increased its efforts to encourage parents to “walk-a-block.”

Parking a block or two away from school and walking the remaining distance with students can help curb congestion and lower the risk of incidents, said Shari Black, the council’s CEO. OSC guards oversee nearly three million school crossings each school year at intersections that have been selected by the city.

Serge Purtell, another Montreal parent, says that drop-off and pickup at his child’s school is well organized: “The only problem I see is the parents.”

Before the pandemic, parents at Commission scolaire de Montréal schools could drop off their children on the playground. They now have to part ways at the school gate, a measure put in place to limit the amount of people entering school property.

Mr. Purtell says he appreciates the measure, but that the congestion it has caused is concerning.

“There’s a large group of parents on the sidewalk, all at the same place, most are not physically distanced, are glued together, and about half aren’t wearing masks.”

He has changed his morning routine, and is now picking up and dropping off his daughter, 10, on a nearby street instead “to keep our distances.”

Mr. Purtell is also pleased with the school’s measures beyond the gate – separating students into cohorts, and having them enter the building through all doors, rather than a single entrance.

In Toronto, Grade 2 teacher Ajmer Darawal is concerned a congested drop-off scenario could play out at Thorncliffe Park Public School, where he works when classes begin again on Sept. 15.

He said 80 to 85 per cent of children at the school do not take the school bus. On a usual day, the outdoor area is “filled with people as far as your eye can see.”

“We have about 3,300 to 3,500 human beings here every morning and at the end of every day, picking up and dropping off their kids.”

The school is still finalizing its protocols for the school mornings and afternoons. Mr. Darawal said plans could involve having students enter school buildings through separate doors, but is awaiting further details.

“Start the conversations today,” he advises parents. “Start talking about what exit and entry will look like, wear your masks.”

“It’s unpredictable what your mornings will look like, so you have to start leaving your houses 30 to 45 minutes earlier.” 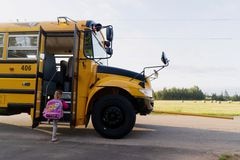 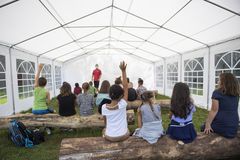 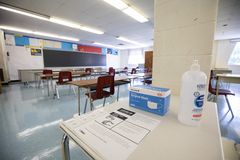