On a weekday morning, just after 5 a.m., Nilpa Jadeja tiptoes into her kitchen while her family is still asleep. She follows her usual routine – washing and chopping the fresh vegetables she bought the previous evening, dicing the onions and grinding the spices required for her Indian dishes. An hour later, a helper arrives and the kitchen transforms into a hive of activity.

She cooks most of the food on two propane gas burners set up in the garage, where she also has two shelving units that hold everything she needs – her lentils and spices are neatly arranged on one rack, while another holds takeout containers. By 10 a.m., two curries, a veggie dish, rice and rotis are ready. They’re packed up and passed on to waiting drivers, who have other full-time jobs starting later in the day, to deliver to 45 homes in and around Brampton.

Throughout the pandemic, hundreds of home-based cooks have launched tiffin services – or homemade Indian meal delivery – in Peel Region. South Asian residents and families, including essential workers and international students, have come to rely on an army of cooks – many of whom found themselves unemployed or with less work during the pandemic – toiling away in their kitchens to provide them with affordable dishes that offer a reassuring taste of home. But as they grow, many such businesses are coming up against regulatory roadblocks – and increasing competition.

Since the pandemic began, Ms. Jadeja kept hearing about people in her community – particularly parents juggling work and family responsibilities – struggling to keep up with making Indian food from scratch at home. “Since I loved cooking, I thought, ‘Why not start a tiffin service for a few people?’ as I was cooking daily anyway,” she says.

The term “tiffin” originates during the British Raj in 18th-century India – at the time, it was used to denote the custom of a light afternoon tea, but has since come to mean the home-cooked meals eaten at lunchtime across India. From farmers working the fields in the rural parts of the country to office-goers in big cities such as Mumbai and Delhi, millions of Indians carry tiffin containers to work or have them delivered at lunchtime by dabbawallas (literally translated as “one who carries a box”).

While Indian and other South Asian home cooking has long been available through word of mouth and other informal channels across the Greater Toronto Area, including in Brampton, delivery-based tiffin services have seen an uptick during the pandemic. Usually small home-based operations run mostly by women, they’ve become an essential option for many time- and cash-strapped families, and also a financial boost for those running them. Some of these home cooks have also become the primary breadwinners for their families, who have come to depend on their earnings.

The ease of marketing through social media and the ready availability of part-time delivery drivers has spurred the growth of tiffin services, particularly in Brampton, which was hit disproportionately hard by the pandemic. In addition to high rates of COVID-19, Brampton faced steep unemployment during the pandemic, with nearly 21 per cent of residents receiving the Canada Emergency Response Benefit last year.

The need for a fallback source of income was what led Satyajeet Roy and his wife, Joyeeta, to launch a small tiffin service last year. Besides doing a Monday-to-Friday tiffin service, as well as catering on weekends, they teamed up with another home cook who prepares Bengali sweets. “We built this business during the pandemic, and it was a lifeline for us,” Mr. Roy says, adding the pair is now hoping to open their own restaurant within the next five years.

Ms. Jadeja, who launched her tiffin service in January of this year, expanded her customer base in a matter of months and is also thinking about next steps. She has since incorporated the business, calling it KriYash Foods – an abbreviation of her children’s names. She got her food handling certificate and is now actively searching for a suitable commercial kitchen, and hopes to be able to employ others and expand within the next few months.

Ms. Jadeja, who came to Canada in 2016 with her husband and children, says leveraging her cooking skills into a full-time operation has been rewarding. “In India, I was a woman of leisure – I never dreamed that I would ever start a business in Canada,” she says, beaming.

Bikram Singh and his wife, recent immigrants and busy professionals living in Brampton, have been ordering tiffin meals from a local Punjabi home cook. Her husband, an enterprising limo driver, has spent the pandemic delivering tiffins – instead of passengers – to their destinations.

Mr. Singh, a restaurant consultant, says the tiffin service he and his wife order usually includes vegetarian dishes such as bhindi masala (spicy okra), lauki daal (lentils cooked with bottle gourd) and karela sabzi (a bitter-melon dish). This typical north Indian menu never fails to transport him back to his childhood in Delhi, he says.

“It is comfort food that fills the stomach and touches an emotional chord, as the meal relates back to home,” he says.

But many tiffin proprietors worry about coming up against laws that regulate food preparation – particularly sections of the provincial Health Protection and Promotion Act and the Food Premises Regulation, which deal with everything from the minimum standards for food temperature and handling, to dishwashing and sanitation practices. Small-scale operators say such regulations are simply too detailed and difficult to comply with.

That means many home-based tiffin services – whether those who run them are aware of the rules or not – are operating as underground businesses, with many limiting their advertising to word of mouth or private social-media groups.

Meanwhile, South Asian restaurateurs and those operating larger tiffin and catering services out of commercial kitchens – who must invest in ensuring their businesses follow the laws to the letter – complain that the home cooks are hammering their margins.

Perminder “Jimmy” Bawa knows a thing or two about what it takes to scale up a home-cooking venture – he started Yummy Punjabi Flavours in 2012 after he and his wife began cooking in their garage, but had to rent a small commercial kitchen just a few months later to keep up with orders. Today, he runs an established tiffin service, employing a small staff who prepare and pack hundreds of tiffins Monday through Friday.

Prior to the pandemic, Mr. Bawa’s business turned out 1,300 tiffins a day, but now faces competition from the growing number of home cooks providing tiffin services at lower cost.

“People like me operating in commercial kitchens have to pay labour, delivery drivers and HST. We also have food inspectors visiting us,” he says. “Some tiffin services are offering tiffins at $5. We have had to bring our prices down to compete, while the cost of food items has gone up. We hardly make much of a profit any more.”

Home cooks, however, say the current regulations create an unfair playing field where they’re unable to meet many of the criteria – such as separate sinks for hand-washing, or specific zoning or licensing requirements – to be able to run even small tiffin services from their homes.

In January, the Ontario government announced new supports for home-based food businesses, putting out a guide on how to launch such an endeavour. But under the current rules, home cooks can only prepare and sell what are described as “low-risk” food items, such as some baked goods, jams and pickles.

Many home cooks do not prepare food or receive orders at a volume that would justify the expense required to operate as a licensed food business – though some, like Ms. Jadeja, do have their food-handling certificate. The tiffin operators The Globe and Mail spoke with say they are following strict COVID-19 protocols, ensuring masking in the kitchen and among delivery drivers, as well as rigorous hand-washing and disinfection of cooking surfaces. Meals are usually delivered right after preparation to avoid any chance of spoilage, as customer loyalty can quickly be destroyed by food gone bad.

Restaurant consultant Mr. Singh says the Ontario government should consider issuing a separate licence for home cooks that establishes guidelines that ensure health and safety practices are followed in home kitchens, and sets a limit on the number of tiffin orders based on kitchen capacity.

In the meantime, for cooks like Ms. Jadeja and the Roys, who are beginning to outgrow their home kitchens, taking the next steps can be a tough decision. Home-based tiffin services make economic sense as long as the numbers stay fairly low – after that, cooks need to consider renting space in a commercial kitchen, which can cost up to $4,000 a month. That means having to pump out at least 300 to 400 tiffin orders a day to be profitable.

Still, some who’ve found success with their home-based food businesses are ready to make the leap.

Before COVID-19 hit, Usha Ramasubram, a senior financial adviser, asked her social-media network whether anyone would be interested in a catered thali service she called Ur Desi Delicacy – similar to tiffin, thali refers to an Indian meal made up of various dishes, usually served on a platter.

With more time on her hands during the pandemic thanks to a flexible work schedule, she went from preparing a few dozen thali orders consisting of up to 15 different items, to around 100 customers and an expanded menu. Her biggest crowd-pleaser is the Rajasthani thali, consisting of baati (baked wheat dumplings dipped in clarified butter) panchemela daal (a creamy five-lentil stew cooked for five hours on low heat) and shahi gatta (gram flour dumplings floating in a rich cashew gravy).

With her husband and two helpers assisting, Ms. Ramasubram prepares the elaborate thalis before customers arrive within a two-hour window to pick up their food, cars constantly pulling into every available parking spot on her street while they await their orders.

Her goal is to start a takeout tiffin service from a commercial kitchen in 2023. Much as Ms. Ramasubram enjoys her day job, she says she is at her happiest when she is in the kitchen making her signature dishes.

“Through cooking, I can show my creativity and passion,” she says, adding that she hopes to draw on her financial savvy to help her transform the thali service into a viable business. “I show love through cooking.” 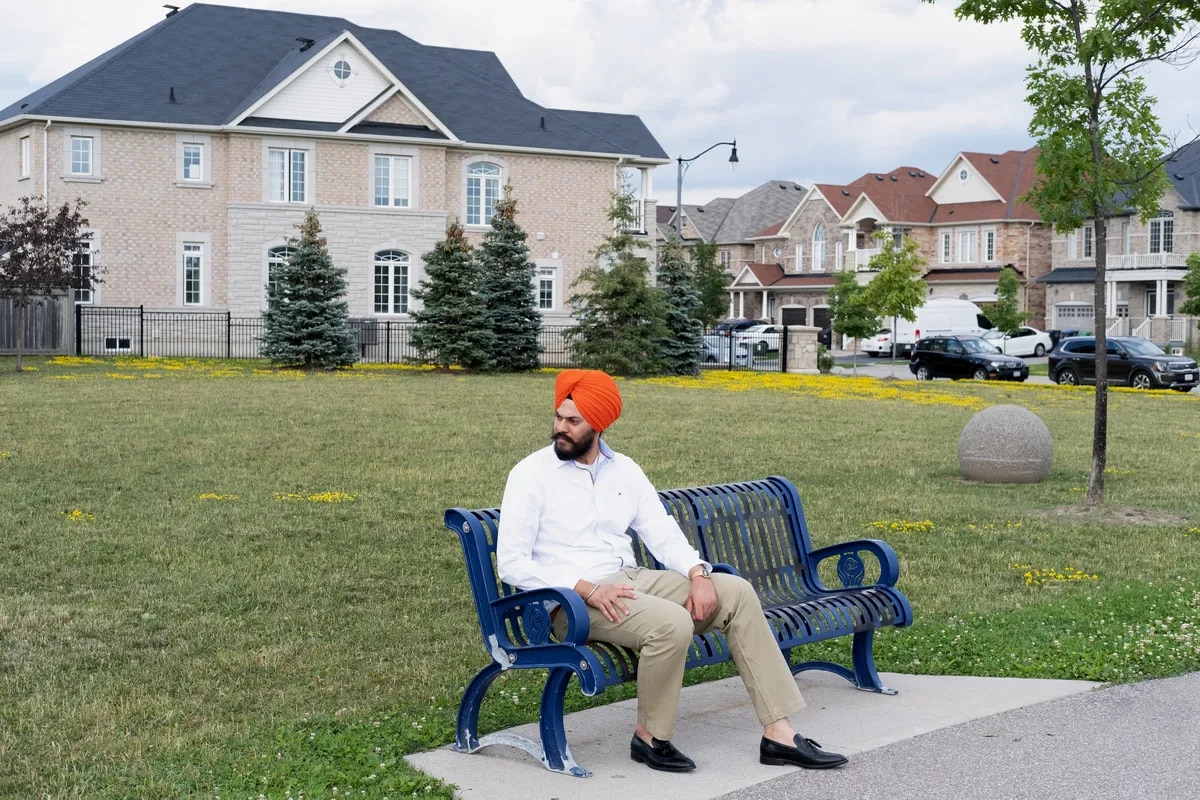 ‘A circle of care that keeps growing’

The COVID-19 pandemic has forced men in Brampton’s South Asian diaspora to speak more candidly about their mental health and what they can do to support one another. Baisakhi Roy and Erin Anderssen report