As I looked over the side of the boat into Cowichan Bay off Vancouver Island, I was hit by a wave of dread. The water looked like mud. There was zero visibility. Decades ago, this used to be a seagrass “meadow” but humans destroyed it by building a massive seaport and through logging. Around the world, seagrass loss rates are now comparable to those reported for mangroves, coral reefs and tropical rainforests, making seagrass meadows among the most threatened ecosystems on Earth, according environmental organization Project Seagrass. 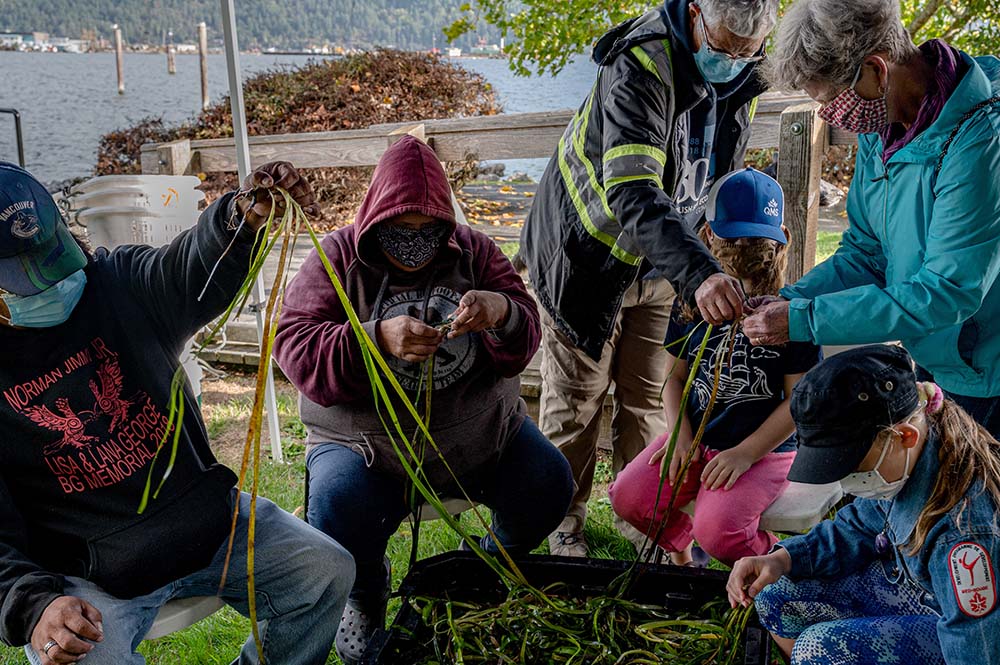 Volunteers help prepare eelgrass for transplant under the watchful eye of Nikki Wright, the executive director of SeaChange. 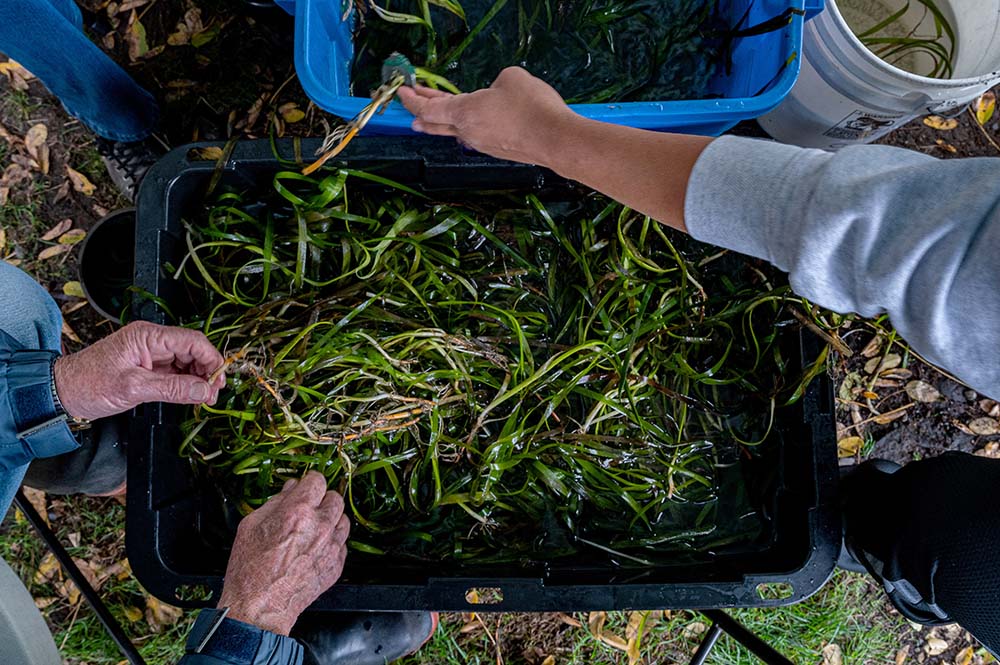 In clear water, seagrasses can stretch for miles. Cloudy water blocks the light they need to survive.

For five years, the SeaChange Marine Conservation Society along with Cowichan Tribes and community volunteers have been working to re-establish these historical underwater eelgrass meadows, which I’ve been sent to photograph.

Eelgrass is one of about 70 species of seagrass, which are flowering plants that are different from seaweed and algae, found throughout the world’s coastlines. Around the world, countries are heeding the calls of experts who are increasingly discussing how important seagrass is for a long list of reasons.

In Cowichan Bay, seagrass is important for salmon, which use it as shelter during their fry stage after swimming downriver. Ahead of the United Nations Climate Change Conference (COP26) in Glasgow in November, the tiny country of Seychelles pledged to protect 100 per cent of its mangroves and seagrass ecosystem in its climate action plan.

Laundry baskets are used to transport eelgrass from the volunteers, to the area in need of restoration. The baskets are an important tool to soak the seagrass during idle time, but light enough to lift, letting the water drain, when needed.

Seagrass, mangroves and salt marshes – known collectively as “blue carbon” – are highly efficient carbon sinks. Seagrasses are able to absorb carbon an estimated 35 times faster than forests on land. By keeping carbon “locked up” and preventing it from entering the atmosphere, seagrass meadows are vital to mitigating climate change.

Viki Kolatkova, PhD student and commercial diver with the SeaChange Society, swims off with bunches of eelgrass in preparation for planting.

The commercial divers I was here to capture use full face masks so they can communicate with the surface. After reaching the seabed, one diver, sounding like an astronaut calling back to Houston, said: “We’ve got about 10 feet of visibility down here.” A wave of relief washed over me. Luckily, only the surface layer had no visibility. It wasn’t exactly crystal-clear water underneath, but it was enough to photograph. Suited up and camera in hand, I dove in. 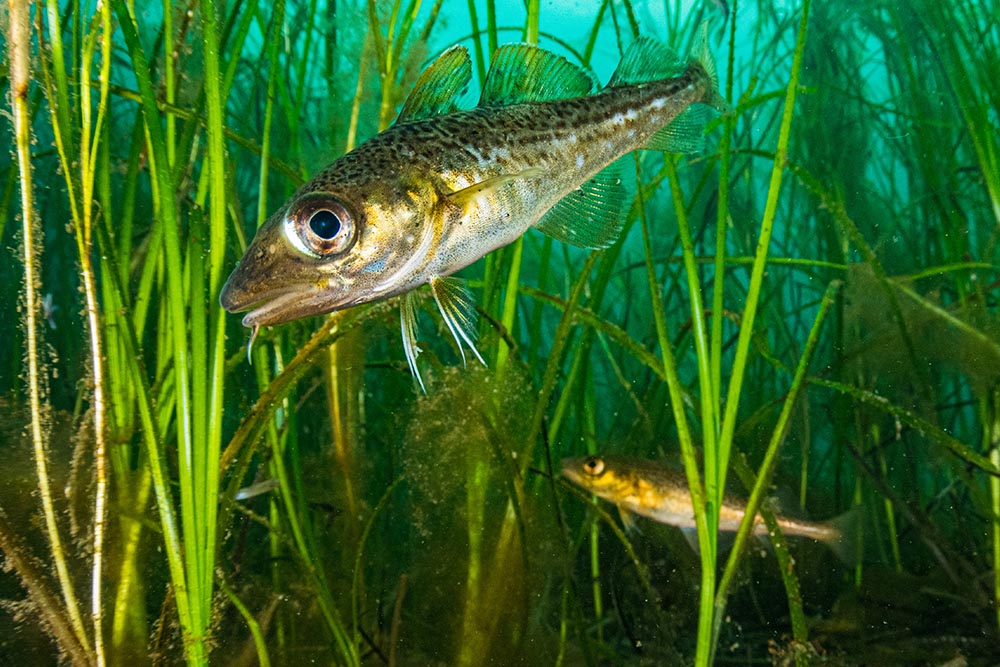 Atlantic cod (Gadus morhua) off Newfoundland Canada were once one of the most caught and eaten fish in the world. In 1992 the fishery collapsed and nearly 40,000 people lost their jobs overnight. Juvenile cod and many other heavily fished species use seagrass as a nursery. The healthier the seagrass is, the better fisheries will likely be. 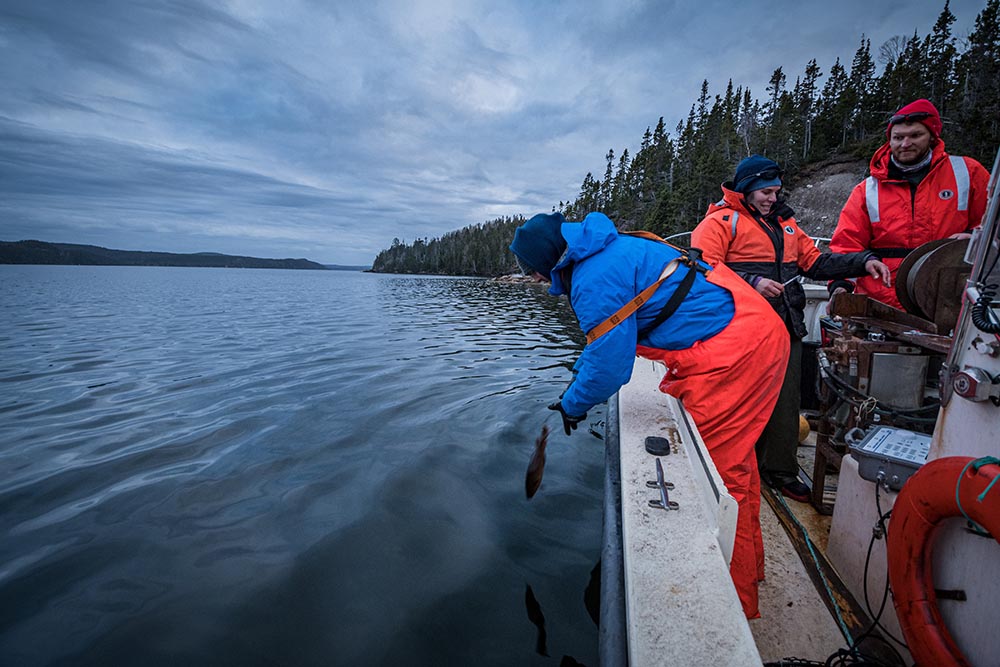 Researchers from the Department of Fisheries and Oceans Canada release a cod after tagging the fish to track his or her movements. 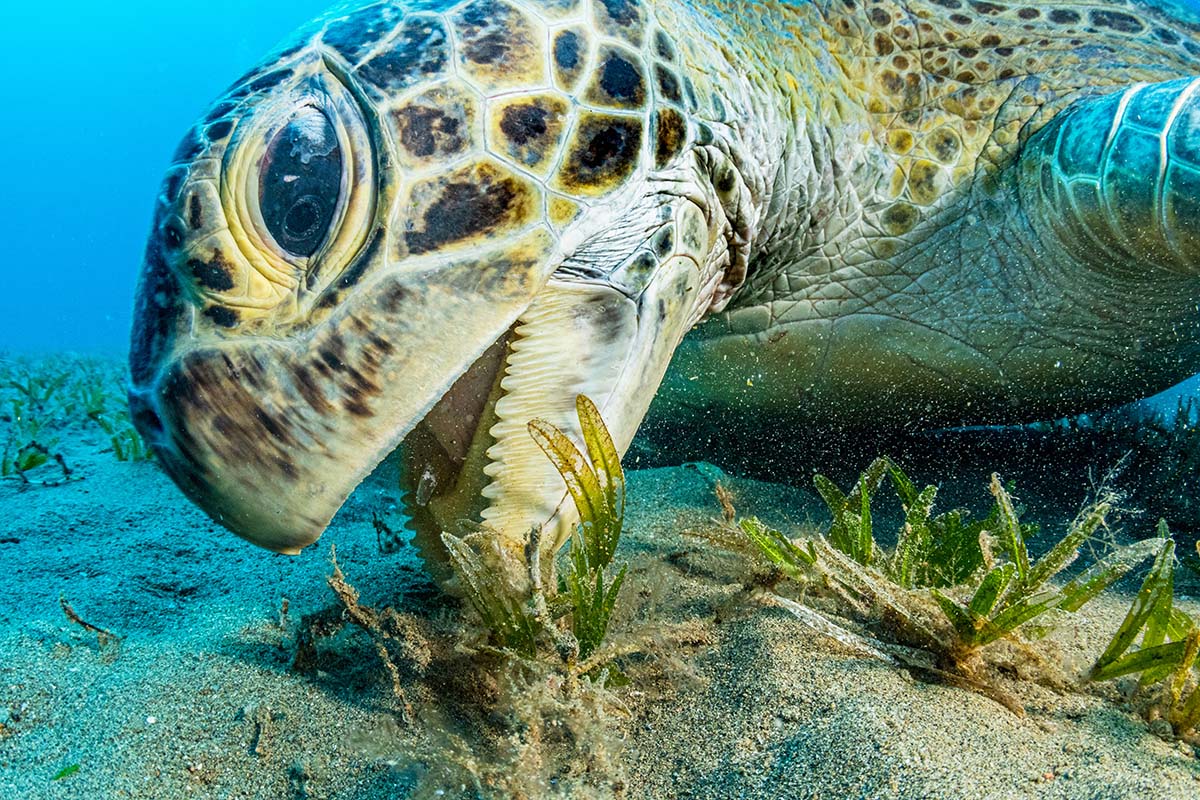 Green sea turtles (Chelonia mydas), like this one photographed in the Egyptian Red Sea, feed almost exclusively on seagrass. 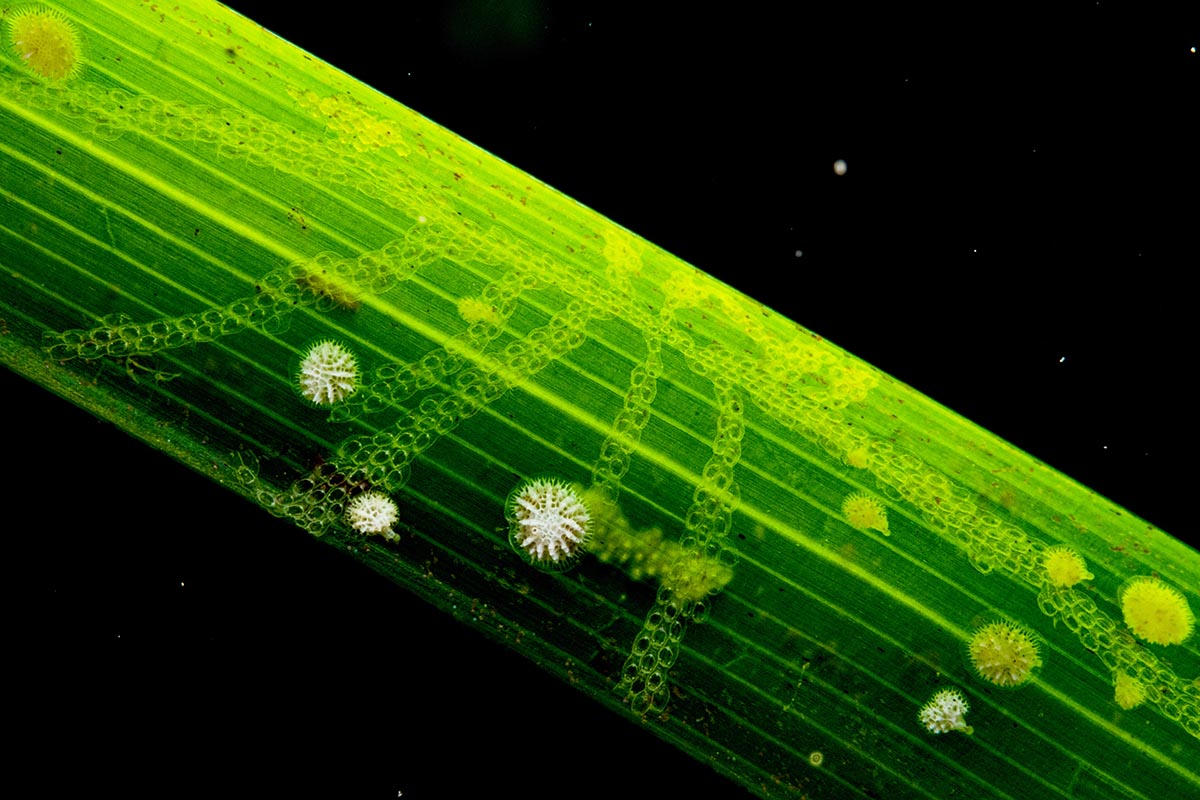 Life on a small scale thrives on individual seagrass blades. Here, colonies of Electra posidoniae (the chain link things) and Lichenopora radiata (the white things) bryozoans on a Posidonia oceanica seagrass blade. If you include this level of organism in the equation, seagrass rivals rain forests in biodiversity. 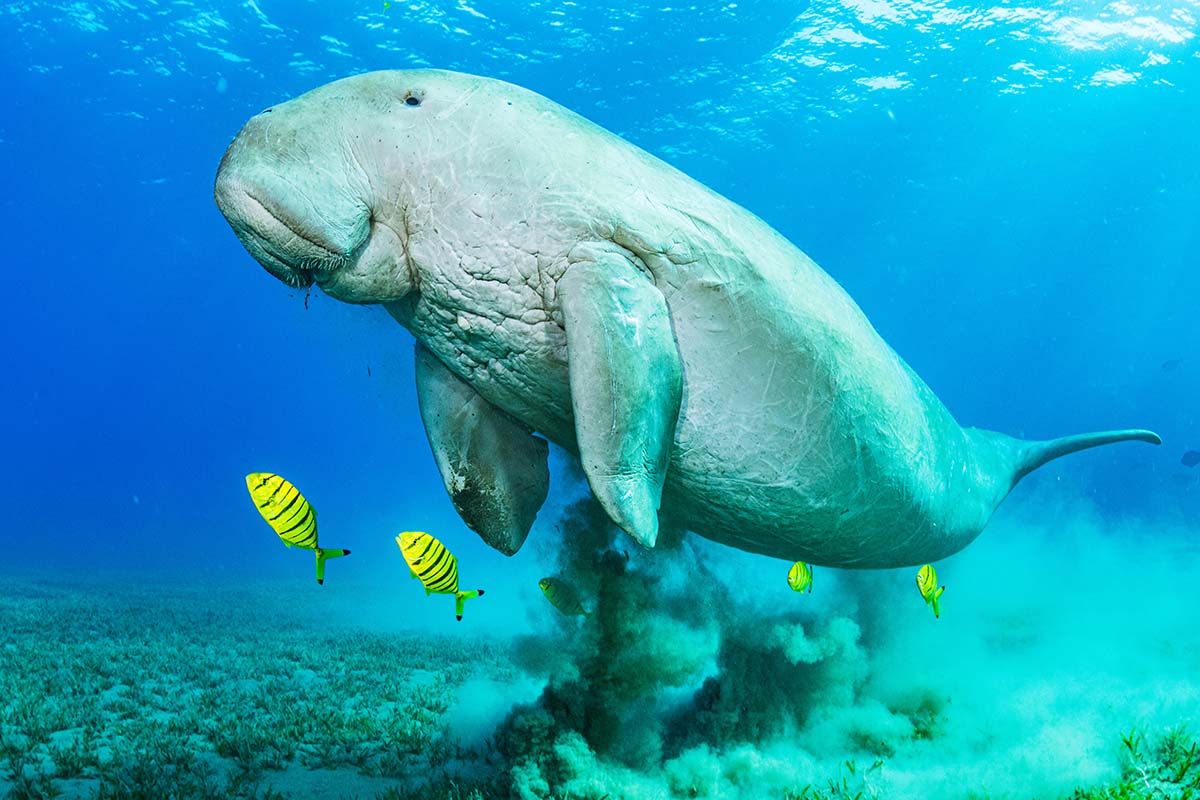 Dugongs (Dugong dugon), like this one in Egypt, are a species Vulnerable to Extinction and feed exclusively on seagrass. One of the largest threats to the species is declining seagrass habitats.

It was fascinating to watch the small team of divers dig into the barren, silty seabed and drop a batch of 10 seagrass shoots, each about one-metre long, into a hole and cover it over before moving on to the next batch. They laid out their underwater garden in clean rows of bright green vegetation, which will fill in over time. It didn’t take long for schools of fish and crabs to move back into this habitat, which had been missing for decades.

As I climbed back on the boat, I spotted a sea lion splashing and thrashing not too far away on the surface as she ripped apart a salmon. It brought to mind the community effort to support the dwindling salmon populations and all the other creatures that depend on a healthy seagrass habitat.

Not all restoration projects work. They can be expensive and time consuming. It’s much more efficient to protect what nature we still have, but under the right circumstances, restoration can yield encouraging results. 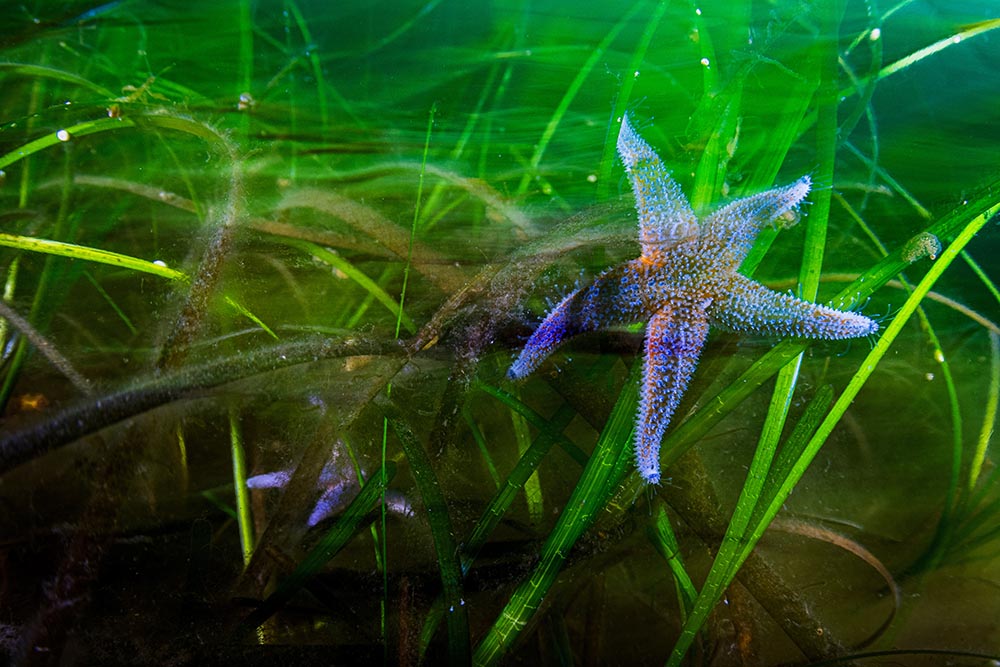 A pair of Northern sea stars or common starfish (Asterias vulgaris) feed on the various creatures and algae growing on eelgrass (Zostera marina) off Newfoundland, Canada. Seagrass can rival rainforests in the biodiversity it supports. 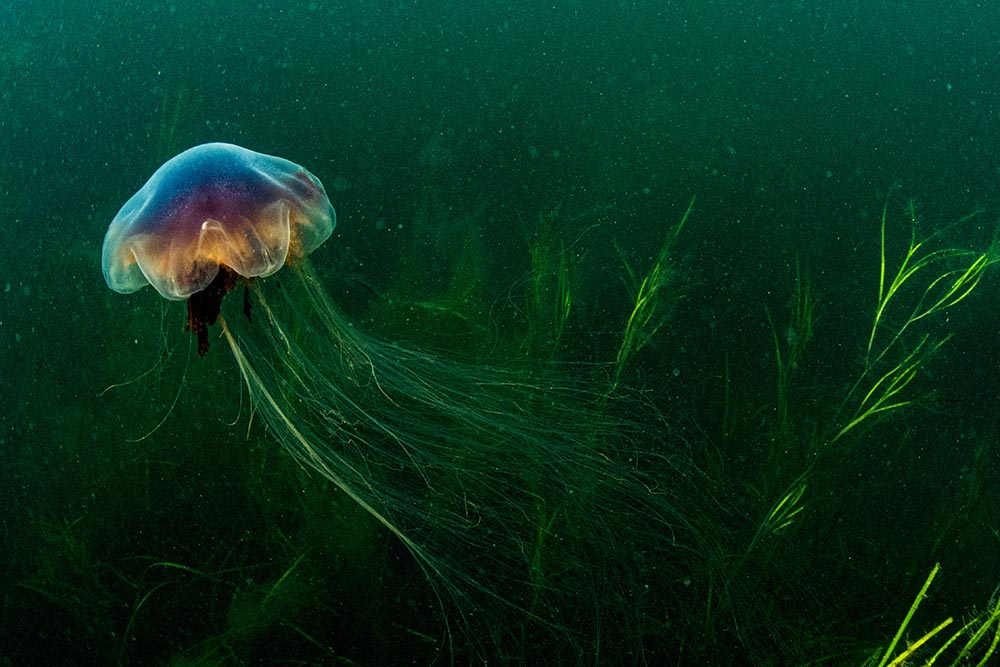 A jellyfish being blown into a sheltered eelgrass bay in Newfoundland, Canada.

As SeaChange executive director Nikki Wright puts it: “If we did things right on land, there wouldn’t be much need for restoration, but projects like this are rejuvenating and energizing when you have such high community engagement like we do [in] Cowichan.” 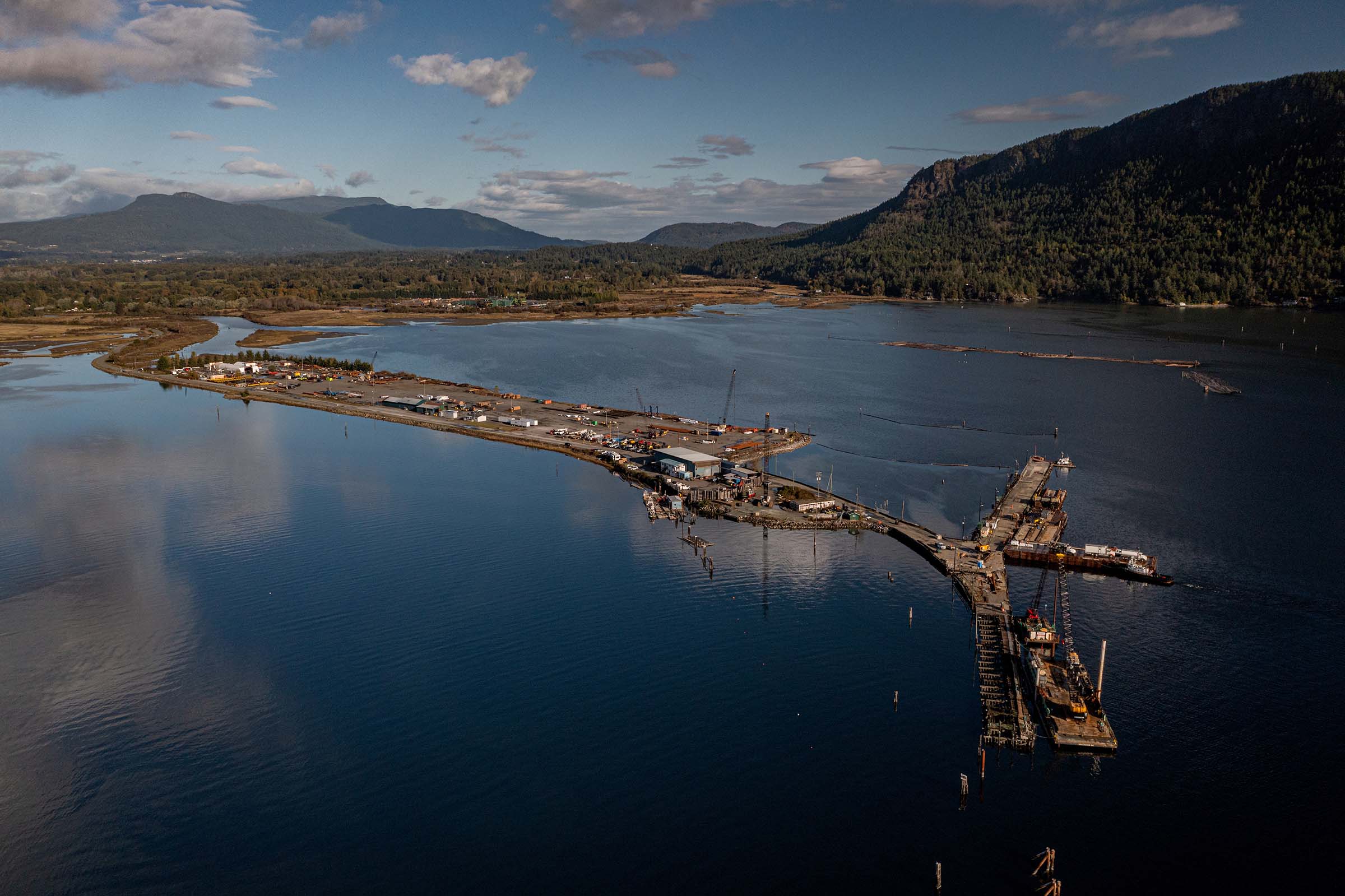 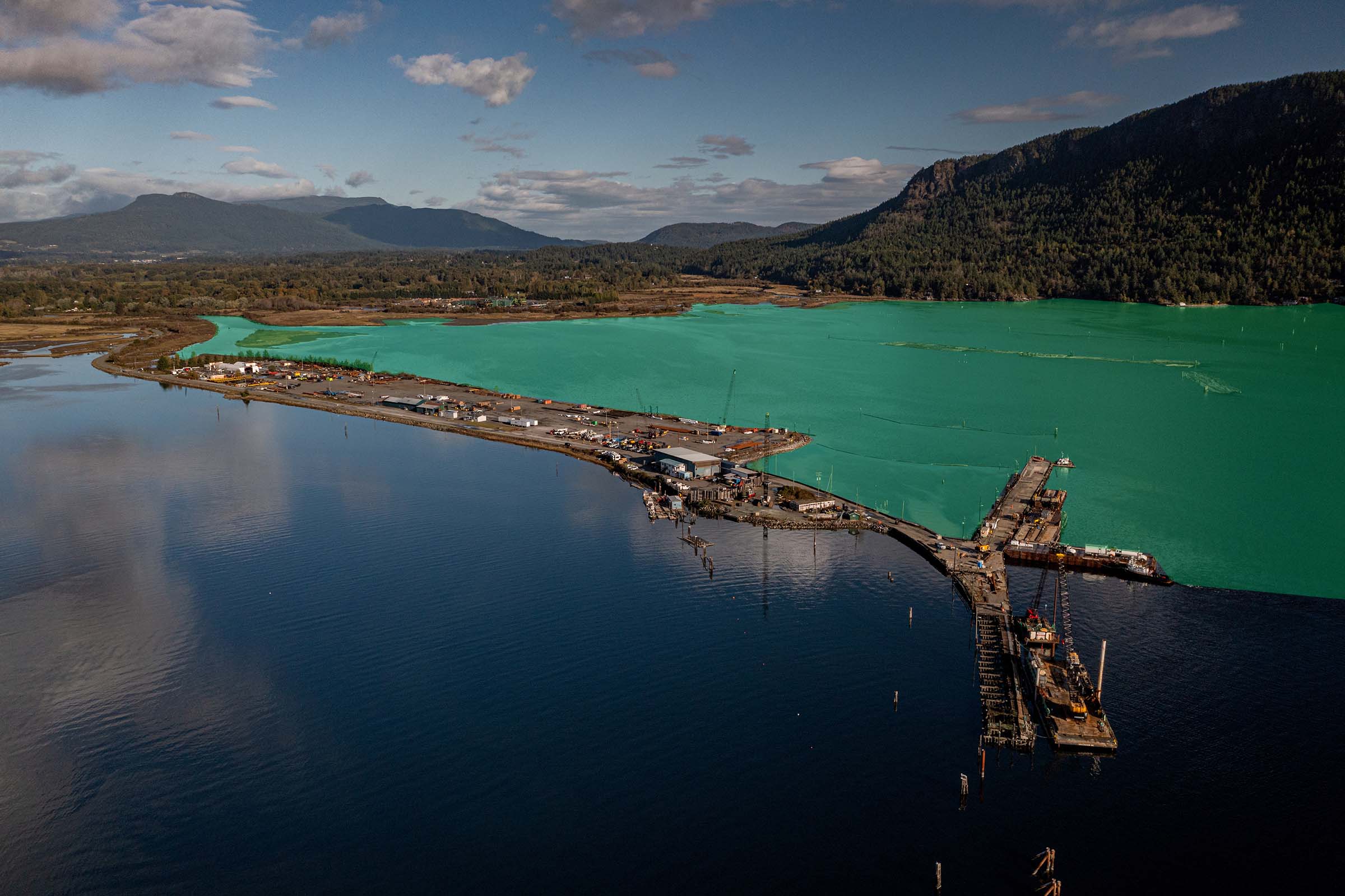 A man-made sea port cuts the Cowichan Bay estuary in half, drastically altering the water movement which played a large roll in killing historic seagrass beds, along with logging. The Cowichan river empties on the side of the bay which had it's seagrass destroyed. Salmon fry leaving the river benefit from healthy seagrass beds as a place to hide. The team with the SeaChange Society is transplanting eelgrass from the healthy side of the bay to the other.

A man-made sea port cuts the Cowichan Bay estuary in half, drastically altering the water movement which played a large roll in killing historic seagrass beds, along with logging. The Cowichan river empties on the side of the bay which had it's seagrass destroyed. Salmon fry leaving the river benefit from healthy seagrass beds as a place to hide. The team with the SeaChange Society is transplanting eelgrass from the healthy side of the bay to the other.

Canada’s climate change election: Five issues we should be talking about before the Sept. 20 vote
September 2, 2021
Five climate myths the world can finally retire
August 15, 2021
Humans are, beyond any reasonable scientific doubt, the primary cause of climate change, UN report says
August 9, 2021