On Canada Day, most people in British Columbia and Alberta were allowed to leave their homes without a mask for the first time in months, as two provincial orders mandating face coverings inside public spaces were lifted.

The same thing will happen in Saskatchewan on July 11 as the province rescinds a host of COVID-19 public-health restrictions that Premier Scott Moe said are no longer necessary with case counts falling and vaccinations rising.

However, some infectious disease experts say Western Canada is relaxing mask rules too soon because the more-contagious Delta variant is spreading across the country before many have received their second dose of vaccine.

Manitoba, Ontario and Quebec have not announced a timetable for rescinding their mask mandates.

Is the COVID-19 pandemic over yet? We can’t say with certainty

Leighanne Parkes, an infectious disease specialist and microbiologist through McGill University and Jewish General Hospital, said some people will see the reliance on voluntary recommendations as an invitation to engage in riskier activity.

She said it puts an unfair burden on front-line workers to police customers in businesses that decide to continue requiring masks.

“Masks are going to protect your employees, but it’s really hard to enforce that when you have people saying ‘I don’t need to wear masks,’ ” Dr. Parkes said.

Having a provincial directive means servers and other employees can just tell people “this is just the rule,” she added. Earlier this week, B.C.’s Provincial Health Officer, Bonnie Henry, told reporters that even without a mask requirement, people should continue to wear face coverings if a business asks them to or if they are not fully immunized.

Alberta lifted nearly all public-health restrictions on Canada Day after 70 per cent of those eligible – anyone older than 12 – received at least one dose of a vaccine, a reopening benchmark reached largely because a higher percentage of residents in Edmonton and Calgary were vaccinated. Calgary is set to revisit its separate mask mandate on Monday.

Roughly 42 per cent of Alberta’s eligible population have received two doses of a vaccine, but Stephanie Smith, an infectious-disease physician at the University of Alberta Hospital, said that rate should be at least 60 per cent before people are allowed to go out in public without covering their faces. Alberta currently has among the lowest rates in Canada when it comes to the percentage of people with at least one dose of the vaccine, though it is ahead of most provinces administering second doses.

About 31 per cent of B.C.’s eligible population are fully vaccinated, which is slightly below the Canadian average, according to the website COVID-19 Tracker Canada, which tracks data between provinces.

“In my ideal world, we would have continued to have a mask mandate for indoor spaces at least for the foreseeable future until we see the vast majority of people are fully vaccinated,” Dr. Smith said. “We can still be allowing for events and everything to continue, but having that extra layer of protection certainly would ease the anxiety of many of us.”

Catherine Clase, a nephrologist who teaches medicine at McMaster University and edits a website dedicated to educating people on the science behind using masks during the pandemic, said she would encourage people to continue to wear masks indoors at least until they are two weeks out from their second dose of vaccine. She also cautioned that some people, such as those with immune system problems because of organ transplants or undergoing chemotherapy, might not be reliably protected by two doses of vaccine.

Last week, the Public Health Agency of Canada recommended Canadians mask up when indoors with strangers if they have only had one dose of vaccine or none. Those who have had two doses can use their discretion in these circumstances, with the agency recommending they don a mask if they are at risk of more serious outcomes if they catch COVID-19.

In the United States, the Centers for Disease Control and Prevention eased the mask-wearing guidelines for people vaccinated twice in mid-May, allowing them to stop wearing masks in most indoor settings and while outdoors. But Los Angeles County recently strongly recommended people go back to wearing masks in places such as grocery stores and clothing stores even if they are fully vaccinated because of the rise of the Delta variant.

Echoing that concern, the World Health Organization recently urged people to continue covering their faces indoors in public, even if they have had two doses of vaccine.

Dr. Parkes said the Delta variant could be 60 per cent more transmissible than previous mutations of the coronavirus, which means people can get infected with less time exposed and less of the virus itself. Masks then offer someone who may be contagious a method of controlling the droplets coming out of their mouths and also protect from inhaling the droplets of others, she said.

“That’s a pretty significant barrier to remove,” Dr. Parkes said of lifting these mandates. “It could be potentially the right ingredient to cause a superspreading event.”

Amy Tan, a clinical associate professor of medicine at the University of British Columbia, said masks are still a political lightning rod because they are seen by some as an intrusion into the Canadian way of life. 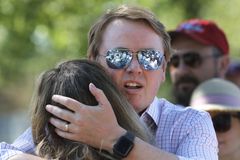 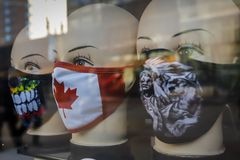 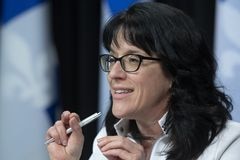