Two teens missing after the roadside slayings of three people in Northern British Columbia over the past week have now been named suspects and are believed to be on the run through Western Canada.

RCMP say the pair have been spotted in Northern Saskatchewan and Manitoba, and investigators are cautioning the public that the fugitives are armed and should not be approached.

A flood of tips since Monday has propelled the investigation into the roadside killings of a travelling couple and, more than 500 kilometres away, the body of a man police have not identified. The teens, Kam McLeod, 19, and Bryer Schmegelsky, 18, were originally reported missing after their burned-out camper truck was found on Friday, but police have changed that assessment.

The teens have Facebook pages under their own names and both are linked to an account called “Illusive Gameing.” That username, complete with the misspelling, also shows up on YouTube, as well as video-game networks Twitch and Steam. The accounts share similar imagery and themes, including the Communist icon, far-right politics, sexualized Japanese anime and the survivalist video game Rust.

The banner image for the Illusive Gameing YouTube account features a modified Soviet flag, but its profile picture is the heraldic eagle of Hitler’s Germany. The page was active as of six months ago.

Steam accounts linked to Mr. Schmegelsky and Mr. McLeod were last active a week before their pickup truck was found on fire on B.C.'s Highway 37.

A Steam user confirmed to The Globe and Mail that he talked to Mr. Schmegelsky regularly online. He recalled Mr. McLeod joining their chats as well.

The user, whom The Globe is not identifying, provided photos sent by an account believed to be owned by Mr. Schmegelsky, showing him in military fatigues, brandishing what appears to be an airsoft rifle – which fires plastic pellets. Another photo shows a swastika armband, and yet another features Mr. Schmegelsky in a gas mask. The photos were reportedly sent in the fall of 2018, but the user said he stopped playing online games with Mr. Schmegelsky earlier this year after he continued to praise Hitler’s Germany.

One account connected to the teens uses the logo of the Azov Battalion, a far-right Ukrainian militia that has been accused of harbouring sympathies to neo-Nazis. Another account claims to be located in Russia, near Moscow, and belongs to several groups for fans of sexualized Japanese animation. That account also used the heraldic eagle of the Nazis.

RCMP said Tuesday the teens from Vancouver Island were seen in Meadow Lake, Sask., on Sunday – police have photos of them taken by a store camera. They were also recently spotted in Gillam, Man., which is near Hudson’s Bay.

Walter Spence, chief of the Fox Lake Cree Nation in Gillam, said in a statement that a vehicle was found burned and discarded near the nation’s reserve, but that he could not confirm it was the vehicle being driven by the teens.

He said he had been in touch with the RCMP and the community was being patrolled as a caution, with the Mounties conducting their work with a large presence.

Sophie Lockhart, a councilor with the First Nation, said area residents are alarmed. “Everybody is scared. I am really afraid for the people at home,” said Ms. Lockhart, who was visiting Winnipeg, but monitoring the situation back in the community. ”Most kids are inside. They never went out after supper.”

The RCMP would not say whether the burned car in Gillam matched the one believed to be driven by the suspects.

Instead, RCMP in Manitoba responded with a statement that said investigators have reason to believe the suspects were recently in the Gillam area and the investigation is ongoing.

“We do not have any further information at this time,” said Corporal Julie Courchaine.

Dwayne Forman, the mayor of the rural Manitoba community of Gillam, said there’s a police presence in town given reports that the suspects have been seen in the area, and that residents are on edge.

“It’s definitely quieter around town. People are holing up in their houses and not going out, which is understandable,” he said in a telephone interview.

American Chynna Deese, 24, and her 23-year-old Australian boyfriend Lucas Fowler were found dead the morning of July 15 on the side of the highway connecting Northern B.C. with Yukon and Alaska. The teens are also being named as suspects in the death of the unidentified heavy-set man in his 50s with grey hair and a beard, whose body was found on Friday a short distance away from the burned camper. 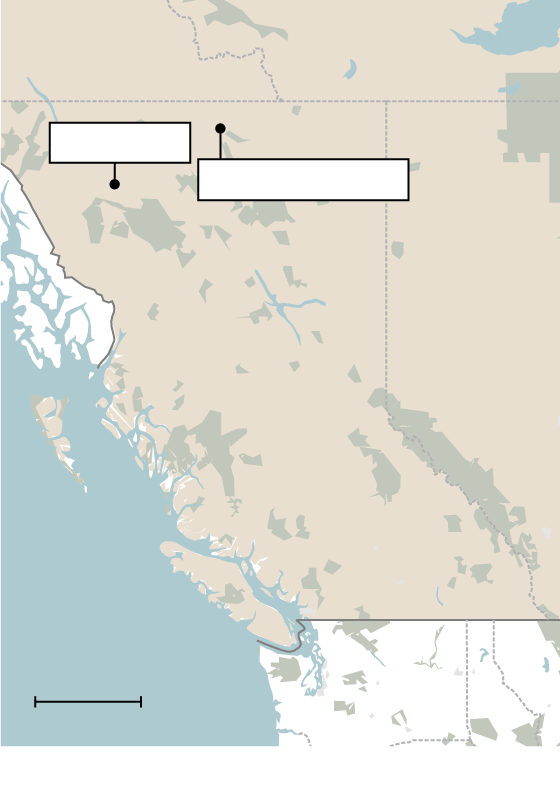 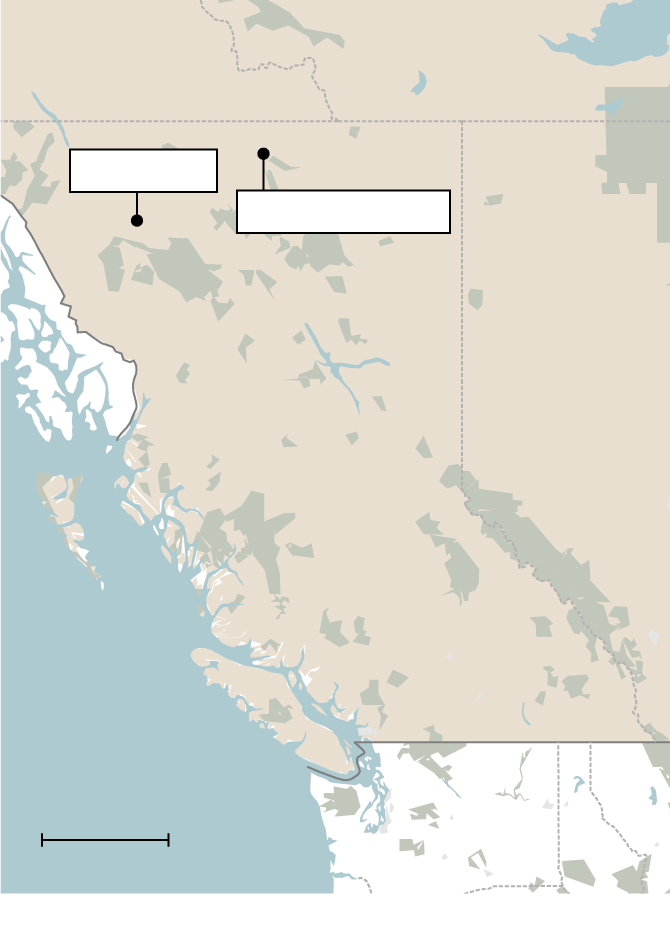 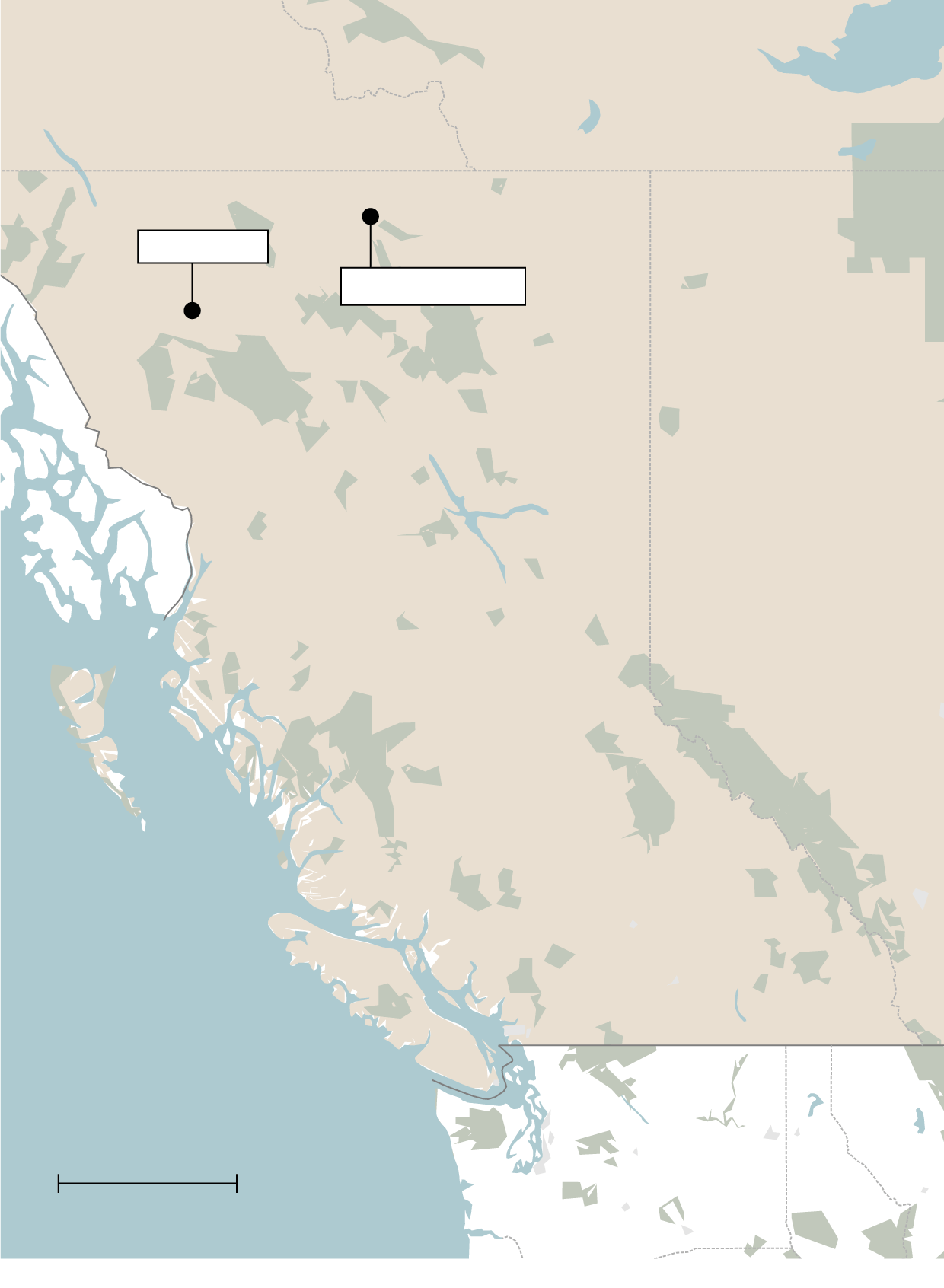 In the Vancouver Island city of Port Alberni, there was no response at the door of Mr. Schmegelsky’s grandmother’s bungalow, where the teen lived until he departed this month. A neighbour said the woman was distraught at the media attention after her grandson went from the subject of a missing-persons probe to a manhunt that now spans Western Canada.

Claudia Bunce, owner of the Cassiar Mountain Jade Store in Jade City, B.C., said the teens stopped in on Thursday, the day before their burned-out truck and the body of the unidentified man was found nearby just off the highway about 115 kilometres from Dease Lake.

The staff member who saw the young men was too shaken to speak to a reporter, but Ms. Bunce said they arrived in the truck and visited the store for free coffee. She said they were on their own and she doesn’t believe they had a conversation with the employee.

“I don’t think they stood out any more than any other teenage boys who were just on the road,” she said. “We’re a very busy store.”

Ms. Bunce said. “It’s very rural – beyond rural. We’re on a highway with no cell service. Most of us don’t have power. So it’s unnerving.”

RCMP were at the store on Tuesday gathering hours of surveillance footage and interviewing staff members.

At an RCMP news conference in Surrey, B.C., on Tuesday, officers declined to discuss why a pair of Vancouver Island teens thought to be looking for work in the Yukon might be involved in three killings. Sergeant Janelle Shoihet confirmed that police have been in touch with the families of the teens, but did not elaborate.

Down the street from Mr. Schmegelsky’s grandmother’s house in Port Alberni, Lisa Lucas said she was shocked the skinny young man her son once spent time with was now a suspect in the deaths.

“I just hate not having any answers to the questions and I just wish none of it was true,” she said Tuesday.

She never saw Mr. Schmegelsky’s travel companion, Mr. McLeod, around her street, but ran into him all the time at the local Walmart where the teens worked in the months leading up to their recent departure from town.

About a month ago, she was searching for a bag to stuff some produce in and Mr. McLeod walked over with a new roll of bags for her and another customer.

“He had a really nice smile,” she said.