Imagine a building designed by an award-winning local architect. More than half a century old, it’s solidly built and beautifully detailed, wrapped in granite accented with brass. Now imagine sticking a 44-storey stack of condos – clumsily designed, awkwardly detailed – on top of that.

A terrible idea, right? Yet this is exactly what’s at stake with a new development application for 250 University Avenue, a building constructed for the Bank of Canada in 1958. The former bank building, prominent on University Avenue, might have escaped your attention. Yet it’s an important example of the way Canada slowly and cautiously went modern, the sort of building that we need to save until we learn to cherish it.

That means rejecting this proposal, which offers a poor design and no meaningful public benefit. That means leaving 250 University alone.

Designed by the firm Marani & Morris, it is in a style that professionals call Modern Classicism. Its facades echo the composition of Classical buildings, with a base, middle and top, but strip away a lot of the details you’d expect to find in those more traditional structures.

It shows the hand of its lead architect, Robert Schofield Morris. He won the international Gold Medal from the Royal Institute of British Architects in 1958 – a very rare honour – but he was no Modern radical. A World War I veteran, he was trained in the 1920s in the Beaux-Arts tradition. He spent 30 years as a partner at the same staid firm, Marani & Morris.

When modernism came to Canada in the 1940s, architects of Mr. Morris’s generation welcomed its new ideas cautiously. As architects to banks and insurance companies, Marani & Morris kept up with the times prudently. Looking at Mr. Morris’s work, you can see buildings of the 1920s evolve gradually into those of the 1940s, as a few flourishes fall away, but the proportions and details – the stone panels that embrace a window, the subtle syncopation of brick courses – remain masterful.

Take the University Avenue building, seven storeys of stony elegance capped by a temple-like penthouse. There are no columns, but there are rectangular piers of grey granite; there’s very little ornamentation, but there are two elaborate pieces of stonework – Canada’s coat of arms above the door, designed by Alexander Scott Carter and carved by Louis Temporale, and a semi-abstract sculpture by Cleeve Horne that suggests a society of Canadians embracing each other.

But the real sculpture is the building itself. And the proposed addition would deface it.

Owners Northam Realty Advisors have hired architectural behemoth IBI Group for the project and the design is sloppy enough to have Bob Morris rolling in his grave. The tower would be a mix of black glass, blue glass, and some kind of stone; the architects propose that this stone, which would likely be in thin panels, would blend with the granite of the Morris building. Meanwhile, the condo’s grid of window-and-stone breaks up at the top for some kind of Deco-ish flourish. In short, it’s a mess.

A decade ago, a developer probably would have tried to knock the bank building down, or keep only its facades. This represents progress. But not enough. According to the developer’s heritage architects, Goldsmith Borgal, “The building’s exterior will not be unduly impacted.”

Nonsense. This is a building that’s designed down to the inch. That new 44-storey pile on top? That’s an “impact.”

The developers appear serious about actually building this. Northam, a real estate asset manager with holdings mostly in the GTA, is also engaged in redeveloping a 1958 office tower at Yonge and Carlton, and replacing it with – yes – an exceptionally large and homely condo tower by IBI Group.

City staff haven’t weighed in yet, but it’s hard to believe they’ll like it. Toronto planners often take a doctrinaire approach to heritage, asking for big new buildings to be designed around fragments of small, old ones. Sometimes they battle to save pieces of buildings that aren’t worth saving. But this one is. The right answer here is no.

250 University is already quite large: about 150,000 square feet, eight storeys tall and filling its site. It’s also visible, standing along University Avenue kitty-corner from Osgoode Hall and across from the Four Seasons Centre for the Performing Arts. It serves the city just fine as vintage office space; and it engages beautifully with University Avenue, one of Toronto’s few big-gesture civic spaces.

Don’t take my word for it. When the old City of Toronto conducted its first Urban Design Awards back in 1992, the jury was asked to pick out “elements” that made the city a better place. Out of tens of thousands of places and buildings, they picked the Bank of Canada.

“As an element contributing to the definition of University Avenue, the building is excellent,” the jury wrote. “Its volume, height and scale are correct for the context ... It stands as a critique to the inappropriate, ‘grandstand’ architecture that has been spread, higgledy-piggledy, along University Avenue.”

A lot has changed in Toronto in the past quarter-century – a lot of building and a lot of higgledy-piggledy – but that is still true. And 250 University looks better than ever.

Will Alsop: A brilliant creator of playful structures
May 16, 2018 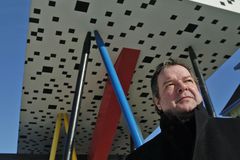 Toronto gets a tall wood tower - and, maybe, an architectural masterpiece
March 29, 2018 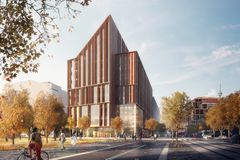 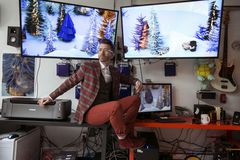