Re Alberta Vs. Everybody? (Letters, Oct. 16): A letter writer from Alberta believes that Justin Trudeau is wrong for saying that he will stand up to Jason Kenney. He should be reminded that, in an unprecedented move, Mr. Kenney travelled all the way to Ontario to campaign for Andrew Scheer – against Mr. Trudeau.

Defeating the Liberal Leader in the election seems to have become an article of faith for far too many Albertans, even though this Liberal government delivered the Trans Mountain Pipeline.

Re Parties Focus On Quebec To Shore Up Battleground Support (Oct. 16): We have an October surprise in Quebec with the Bloc Québécois’s dramatic rise in recent weeks. What’s not surprising is how all this could have been predicted.

There’s plenty of history in Quebec of sudden dramatic shifts among big blocs of voters during the course of a campaign. It benefited Jack Layton’s NDP in 2011. It’s now benefiting the Bloc under Yves-François Blanchet and his ally in Quebec Premier François Legault.

Columnist Lawrence Martin raises the question, “Why Didn’t Trudeau Play The Trump Card?” (Oct. 16). Many have wondered the same thing. The Conservatives, Justin Trudeau’s opponents, are not what they once were. Ever since Stephen Harper came on the scene, it has felt like they became Canadian Republicans, and Andrew Scheer is no exception.

As Mr. Martin writes: "The Conservative Leader has spoken out in favour of Brexit. He favours more tax breaks for the rich. He’s softer on guns than his Canadian opponents, more to the right on social issues.”

With the political disaster unfolding in the United States, coupled with Mr. Harper’s own support of Brexit, Canadians should consider whose best interests are actually being served by the Conservative platform.

Re The Platform That Dare Not Speak Its Name (Editorial, Oct. 15): It should also be noted that Andrew Scheer has not financially accounted for his “energy corridor.”

A 2016 University of Calgary study pegged its cost at $100-billion. It’s fair to ask Mr. Scheer how he would pay for this project without escalating the deficit far beyond what has been allowed for in the Conservative costed platform.

Depths of a deficit

Re Without A Bottom Line, This Federal Election Has Devolved Into Fiscal Debauchery (Oct. 15): There is a complacency about government deficits that should worry all Canadians. The economy is doing well now but, as a country whose prosperity depends on trade, a recession triggered by events beyond our control could hit us any time.

When that happens, government expenditures will rise, while revenues drop. The deficit and the debt-to-GDP ratio will go up. With an increased demand for borrowing, interest rates also tend to go up, which compounds the problem.

This can happen rather quickly, leading to what Canada faced in the mid-1990s, when then-finance minister Paul Martin concluded he had to slay the deficit “come hell or high water.” Major and painful budget cuts were made as a result. Have we learned nothing from that history?

I believe there is really no justification for running deficits, except during recessions or times of war. Doing so to give ourselves politically appealing – but unsustainable – benefits may be popular now. But it is really quite irresponsible to future generations, which will have to bear the burden of our profligacy.

Re Right-wing Think Tank Gave Donations To Third Parties For Attack Ads On Liberals (Oct. 16): So Preston Manning’s conservative think tank says its collection of funds for election advertising is legal, as well as its distribution to third parties who have gone on to produce attack ads against the Liberals. If all this is following the law, then the law should be changed to prevent any third party from spreading potential misinformation about any politician.

Re Uniting A Divided Canada (Opinion, Oct. 12): Preston Manning offered up his version of an idealistic, non-partisan appeal to a new Canadian vision. It reminded me, unfortunately, of a warmed-over reiteration of the former Reform Party of Canada’s platform: disparagement of linguistic protections, criticism of the Senate, calls to rebalance equalization payments and, above all else, primacy of free-market considerations. Canadians have heard it all before; most of the country found it wanting the first time.

Mr. Manning cites 1863 as an inspirational turning point, but it seems he wishes it was still 1993. Nearly three decades later, perhaps it’s time he embraced the role of dispassionate elder statesmen with wisdom to impart – a role from which all Canadians could benefit – rather than offering yesterday’s solutions to today’s problems.

Re A First Nation’s Intergenerational Poisoning (Oct. 10): The story about mercury poisoning at Grassy Narrows struck me as a powerful parable of our current climate-change crisis. The theme in both cases is one of present consumption at the future’s expense.

Reed Paper shareholders made money; pulp workers got high-paying jobs. But the company cut corners to maximize profit, polluted the Grassy Narrows river system and left the consequences to some vague, unaccountable future. And tellingly, the consequences have not been a one-off. Rather, they propagate down the generations.

Re Canada Suspends New Weapons Sales To Turkey Amid Incursion In Syria (Oct. 16): We Canadians are nothing if not upright. Indeed, we convulse at the slightest hint of impropriety. Now, yet again, we show the world that we will not countenance violence by giving Turkey more weapons than we have already given them.

It wouldn’t be right to continue weapons sales at this time, we say, because it seems Turkey is using existing ones to kill in Syria. How could this ever have been predicted? But take heart: I believe Canada will do everything it can to ramp up sales again, as soon as it is expedient.

Re I Like To Go To Bed Early. How Do I Tell Lingering House Guests To Leave? (Oct. 16): My parents entertained a lot over the years. My father would eventually say: “Well, Marion, let’s go to bed. Our guests might like to go home.” 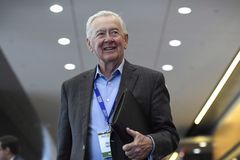 Opinion
Let’s be clear: This is what happens if Canada elects something other than a majority
Subscriber content
October 18, 2019 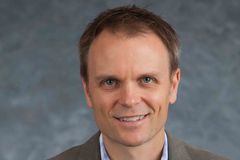 Opinion
This is the federal election campaign that decency forgot
Subscriber content
October 16, 2019 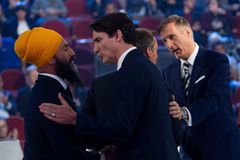