Vowing to "rescue Venezuela from dictatorship,” the head of the country’s National Assembly, Juan Guaido, declared himself interim president on Jan. 23. He said President Nicolas Maduro, who had been sworn in for a second term two weeks earlier, had won by illegitimate means in an election in which major opposition parties were barred from participating. Mr. Guaido invoked a part of Venezuela’s constitution that says the National Assembly leader assumes the presidency temporarily if the office is left vacant, and that since Mr. Maduro was not sworn in legitimately, that condition now applies.

In a co-ordinated action, the United States and a chorus of other countries (including Canada) quickly backed Mr. Guaido as leader and U.S. President Donald Trump called on Mr. Maduro to resign. The move, which to some harkened back to dark episodes of heavy-handed U.S. interventions in Latin America during the Cold War, drew a strong rebuke from Mr. Maduro. “Don’t trust the gringos,” he said in a speech in Caracas, rattling off a long list of U.S.-backed military coups – Guatemala, Chile, Brazil – in decades past. “They don’t have friends or loyalties. They only have interests, guts and the ambition to take Venezuela’s oil, gas and gold.” He announced that he would sever diplomatic ties with the United States and gave U.S. diplomats 72 hours to leave the country.

Around the world, countries fell into either pro-Maduro or pro-Guaido camps. Here’s where some countries are leaning so far: 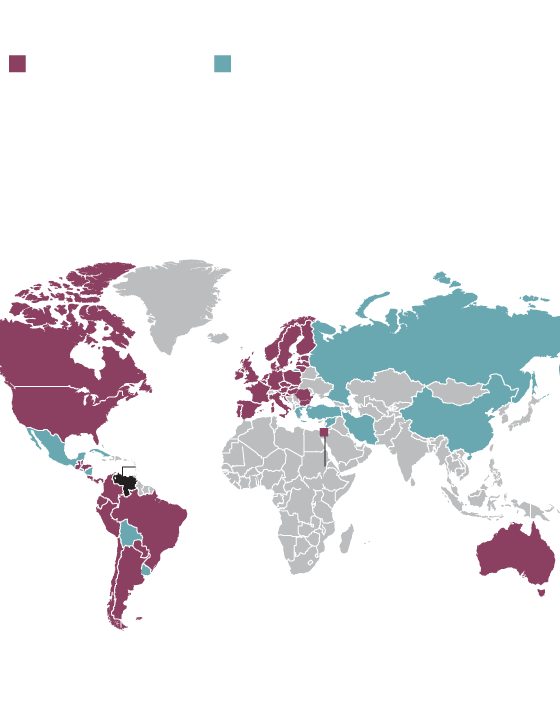 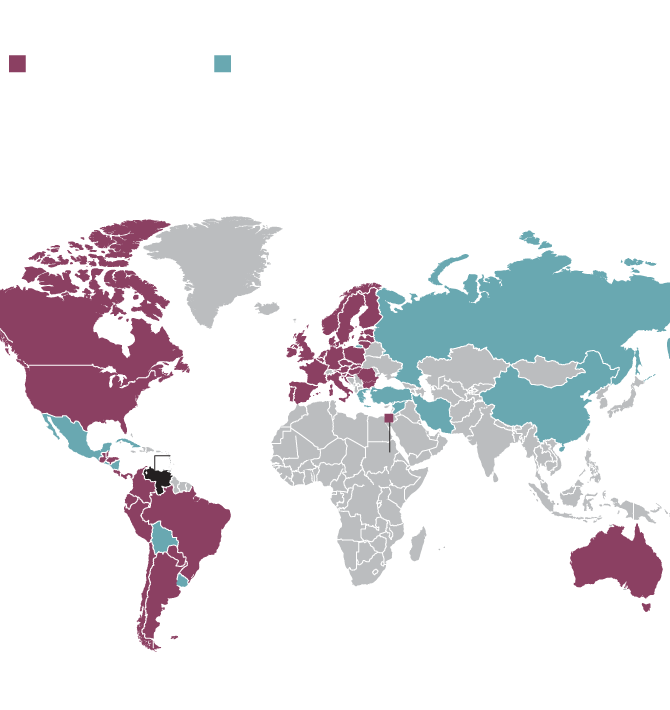 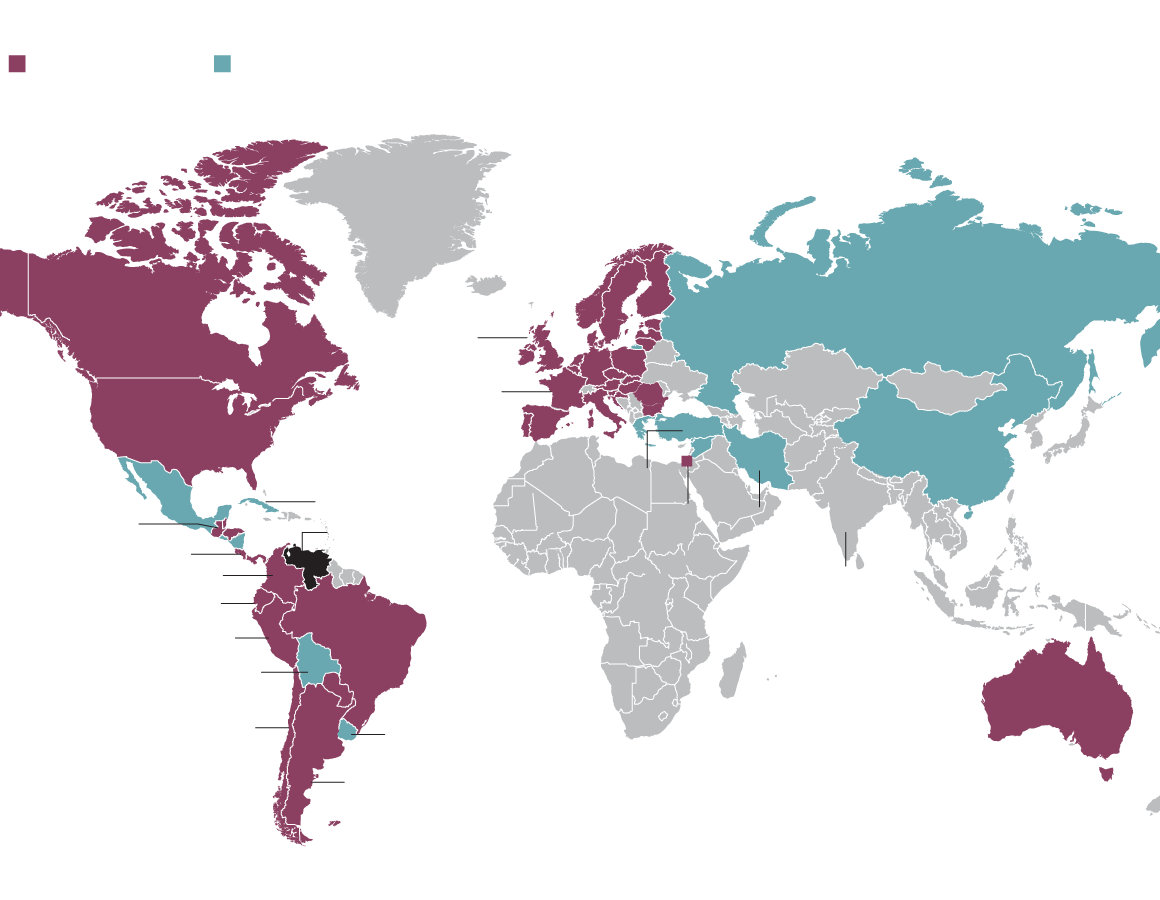 A former foreign minister and bus driver, Mr. Maduro was elected in 2013 to replace his mentor, president Hugo Chavez, who had ruled Venezuela since 1999 and who died in 2013 while in office at the age of 58. Mr. Maduro continued his predecessor’s socialist approach to the country and policies, but an ailing economy made his hold on power tenuous. Inflation, chronic shortages of basic goods and allegations of corruption led to years of rolling protests against him.

An industrial engineer who cut his political teeth in a student protest movement a decade ago, Mr. Guaido, 35, was elected to the legislature in 2015. Few Venezuelans had even heard of him when he was plucked from anonymity and named as president of the opposition-controlled National Assembly in early January.

Mr. Guaido’s mentor, Venezuela’s most popular opposition leader, is currently muzzled under house arrest and considered by government opponents to be a political prisoner. It was he who manoeuvred behind the scenes for his Popular Will party to assume the presidency of the gutted legislature and then he tapped Mr. Guaido to lead the party. The two talk a half dozen times each day and not a single speech or move isn’t co-ordinated with Mr. Lopez first, said one ally, who remained unnamed because they were not authorized to discuss the internal proceedings.

How we got here

The rough transition: The social-welfare programs designed by Mr. Chavez had depended for years on the oil-rich country’s energy revenue, but after his death, oil prices sank and those programs faltered. Venezuela spiraled into its worst-ever economic crisis. Venezuelans struggled with malnutrition (especially among children) and an inflation rate that surpassed 100 per cent and was the highest in the country’s history and the highest in the world. Anti-Maduro protests in 2014 led to more than 40 deaths and thousands of arrests.

State of emergency: Venezuela’s oil-dependent economy continued to perform abysmally. In January, 2016, Mr. Maduro declared an “economic emergency,” revealing the extent of Venezuela’s crisis and expanded the government’s powers. The government set a 60-day emergency, which gave Mr. Maduro powers to intervene in companies or limit access to currency. The opposition coalition said that policy incompetence was responsible for Venezuela’s economic mess and said it wanted to find a “constitutional way” to remove Mr. Maduro during the 2016 calendar year.

A shift in the legislature: In mid-2016, protests broke out after the disputed 2015 Venezuelan parliamentary elections, where the National Assembly, dominated by pro-Maduro alliances, lost its first election since the legislature was created in 1999. The opposition secured a two-thirds majority that could have potentially replaced Mr. Maduro and passed laws without the President’s support. In a speech shortly after, however, Mr. Maduro said he would give no quarter to the opposition despite his own party’s defeat and he vowed to block “the counter-revolutionary right” from taking over the country. On Sept. 1, 2016, more than a million Venezuelans (3 per cent of the country) gathered in protests to demand a recall election for Mr. Maduro.

Maduro tightens his grip: In March, 2017, the Maduro-aligned Supreme Tribunal – a judicial body that had replaced the country’s Supreme Court in 1999 – took over the functions of the National Assembly and overturned most of its decisions since the opposition took control. A month later, Mr. Maduro announced elections for a new, all-powerful legislature loaded with his own supporters, which was elected into office and stripped the National Assembly of its powers.

The 2018 election: Venezuelans were due for another presidential election in 2018, but Mr. Maduro declared that leading opposition parties would be barred from taking part in it. He won that election with 67.5 per cent of the vote, but it was quickly deemed fraudulent and denounced by countries around the world, including Canada. Mr. Maduro was sworn in for a second term on Jan. 10, two weeks before Mr. Guaido declared he was the legitimate president.

Guaido’s next moves: Mr. Guaido has promised a transition government to revive the economy and an amnesty for military officers if they help push Mr. Maduro from power. He faces the daunting task of pushing forward the transition plan without control over crucial state institutions.

Washington and its allies' next moves: Mr. Trump, whose administration has already imposed various sanctions on Venezuelan officials, promised to use the “full weight” of U.S. economic and diplomatic power to push for the restoration of Venezuela’s democracy, possibly including sanctions on crude oil exports. He’s also mused about military intervention, though Canada and Latin American countries in the Lima Group have openly committed to a peaceful solution. “Canada is absolutely not considering a military intervention,” Foreign Affairs Minister Chrystia Freeland said at a Feb. 4 Lima Group summit in Ottawa.

Campbell Clark: On Venezuela, middle-power global players could make a difference – even if it’s modest

Ken Frankel: Venezuela crisis will be a true test of Canada’s leadership in the hemisphere

Michael Shifter: The Monroe Doctrine may be dead in Latin America, but its ghost still haunts the White House

Associated Press and Reuters, with reports from Globe staff