The first season of Big Little Lies in 2017 was more than gem. It was a brilliant, beautifully made and crafted drama. Pulpy fiction of the highest order, it was set among well-off, smart but brittle people in beautiful Monterey, Calif. And it was mainly about the women. Its all-star cast of Reese Witherspoon, Nicole Kidman, Alexander Skarsgard, Shailene Woodley and Laura Dern, drew attention to it but the attention was wonderfully rewarded.

It was meant to be a one-off. The entire story of the novel it was based on, by Liane Moriarty, had been told. Besides, getting this group of actors together again seemed implausible.

The second season of Big Little Lies (Sunday Crave, HBO 9 p.m.) is no second-season misfire or mere milking the story and cast for a nice but redundant reunion. It’s startlingly good, another exquisite dose of pulpy storytelling; sharply funny, incisive and that all-star cast now has another standout female character, played by Meryl Streep.

It starts with a convenient, short flashback reminder, going back to the conclusion of the first season. That’s the night that Perry (Skarsgard), the abusive husband of Celeste (Kidman) and also the man who raped Jane (Woodley) years earlier, appeared to fall down the stairs to his death at a school fundraiser party. We know, of course, that he was pushed. As far as the women there, and the audience were concerned, he deserved it.

The first words spoken in Season 2 are by Celeste: “I was having a nightmare,” she tells Perry’s mom, Mary Louise (Streep.) It’s true, but those nightmares about Perry’s abuse are not her only problem. The real nightmare is right there, embodied by Mary Louise. Perry’s mom is helping around the house and with the kids, since her son’s death, but she’s also trying to find out how, exactly, her son died and why.

Streep is shockingly good here, as you might expect. Mary Louise is a demon in mousy disguise. There’s a beautiful scene in the first episode in which she’s chatting amiably with Madeline (Witherspoon.) It seems inconsequential until Mary Louise sizes up Madeline, remarks on how short she is and announces, “I find little people to be untrustworthy.” This is one icily determined and dangerous mother-in-law.

As the Women’s World Cup kicks off, the game still lacks the respect it deserves

At the core of the early going in the story, is Bonnie (Zoë Kravitz) who pushed Perry to his death in an intuitive, angry response to his attack on Celeste. Many months later, she’s “mentally checked out” as her husband describes her. She disappears for long running sessions, gives him blank stares and retreats. The others are worried about her, as they should be, since she knows the truth they deny. But Mary Louise is the one who should truly scare them.

Unworried and not scared at all is Renata (Dern), whose sunny super-capitalist disposition is unnerving, as it was in Season 1. She’s happy to be rich and very happy to declare that she is. Dern is in wonderful form here. She glows righteous pride in her wealth and her home and is ready to manipulate or scold anyone who displeases her. Madeline says, at one point during a speech at the Otter Bay Elementary School, where the children of the central characters study, “Most of us know that most endings to most stories suck.” Renata doesn’t think anything sucks, ever. She makes sure it doesn’t.

It is a huge relief to find that this continuation of the story (based on three episodes received for review) never falters. David E. Kelley, who adapted the Moriarty novel for Season 1, wrote this second season, from a new story by Moriarty herself. And while much of the sheer vigour of the tone and visual oomph of Season 1 was credited to Canadian director Jean-Marc Vallée, new director Andrea Arnold and cinematographer Jim Frohna truly capture that same outrageously empathic visual styling. It’s a visual idiom that sure sizzles, making the natural setting and the homes both captivating and unnerving.

What is also here in the continuation is a fabulous sense of humour. There are scenes of exquisite dry hilarity. Madeline’s husband Ed (Adam Scott) runs into a woman in the supermarket. He feels he knows her but doesn’t recognize her. “I had my breasts done,” she explains coolly. She explains she’d always been self-conscious, but about her nose. “Now nobody notices my nose so much,” she concludes. He doesn’t know where to look.

There is a thrilling energy, again, to Big Little Lies. It’s the very best of premium-popcorn TV. Utterly captivating.

The 73rd Annual Tony Awards (Sunday, CBS, CTV, 8 p.m.) promises high-jinks and stellar live performances and usually delivers. James Corden returns to host the awards live from Radio City Music Hall in New York. There will be performances from Ain’t Too Proud: The Life and Times of the Temptations; Beetlejuice; The Cher Show; Choir Boy; Hadestown; Kiss Me, Kate; Oklahoma!; The Prom; and Tootsie. Get out your dancin’ shoes.

Don’t forget other major arrivals this weekend. The wonderfully warm and slyly sentimental Armistead Maupin’s Tales of the City streams on Netflix and was reviewed earlier this past week. And The Handmaid’s Tale, also reviewed recently, returns for another grimly scalding season. (Sunday, Bravo, 9 p.m., with two episodes.)

Corus is all fired up to sell TV ad time, hoping to not get burned Subscriber content
June 5, 2019 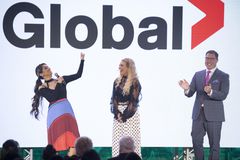 Opinion
Netflix gently revives a culture-war target with Tales of the City
June 5, 2019 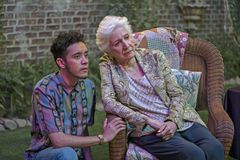 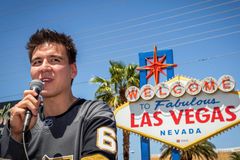