The Canadian dollar shot up by more than a penny today, topping the 70-cent mark, amid suddenly shifting expectations on interest rates and amid higher oil prices.

Also at play was a scramble by short shellers.

At play along with oil was the fact that the Bank of Canada decided yesterday not to cut its benchmark rate, and expectations for a move down the road are fading.

“The market was overly pessimistic on the Canadian dollar,” Mr. Osborne said.

And given the speed of the downward spiral in the loonie, “it’s not surprising that we’ve seen a fairly violent correction.”

Mr. Osborne believes the loonie could gain another penny or two of oil stabilizes.

Not everyone is that upbeat.

JPMorgan Chase, for example, said today it still expects the currency to bottom out at about 68 cents, or possibly as low as just above 65.5 cents “should oil weaken substantially further from here and trigger more onerous negative spillovers.”

For the record, it was 14 years ago today that the Canadian dollar hit its record low just shy of 62 cents.

Canadian Pacific Railway Ltd. says it will shed 1,000 jobs and cut spending by $400-million this year as the railway grapples with declining freight volumes in a sluggish economy.

The job cuts come on top the the roughly 6,000 or 7,000 positions the company has shed since Hunter Harrison took the helm after a proxy fight in 2012, The Globe and Mail’s Eric Atkins reports.

CP also today posted quarterly adjusted per-share profit of $2.72, missing the analyst consensus of $2.76. Revenue was slightly below the forecast, at $1.6-billion.

You’re to be forgiven if you can’t quite figure out the state of Canada’s economy from Wednesday’s snippets.

As The Globe and Mail’s Robert Fife reports, Mr. Trudeau took the stage at a key economic and political gathering to sell the crowd on Canada’s attributes.

And as The Globe’s Barrie McKenna and Bill Curry report, Mr. Poloz warned of a stalling economy in the fourth quarter even as he held his benchmark rate steady and pinned his hopes on government stimulus, at the same time pointing to better times ahead.

What’s going on here, of course, is that Mr. Trudeau campaigned on an infrastructure spending program, the details of which aren’t yet known.

And Mr. Poloz said that played a role in the decision he and his Bank of Canada colleagues unveiled Wednesday, saying that “the likelihood of new fiscal stimulus” was an important factor.

“This could signal that a very large fiscal stimulus should be announced soon,” said Charles St-Arnaud of the Nomura economics group.

Here’s what they said:

Mr. Trudeau, with a glass half full: “We have social stability, financial stability and a government to invest in the future ... The low oil prices are a challenge but the Canadian economy is a lot more than just natural resources.”

Mr. Poloz, with a glass half empty: “The drop in oil and other commodity prices constitutes a significant setback for the Canadian economy and has set in motion a protracted adjustment process. ... It is disrupting the lives of many Canadians, whether through job losses or through higher prices for imported goods. ... Although the economy may grow more slowly than we would like during that transition, it can still achieve above-potential growth and absorb its excess capacity.”

David Madani of Capital Economics, one of the more pessimistic analysts, with a glass that’s empty: “We think the bank’s latest GDP forecasts of 1.4 per cent in 2016 and 2.4 per cent in 2017 are woefully optimistic. ... With the low level of business confidence pointing to a shrinking economy rather than a growing one, we think the economy will be lucky to grow by even 1 per cent in 2016.” 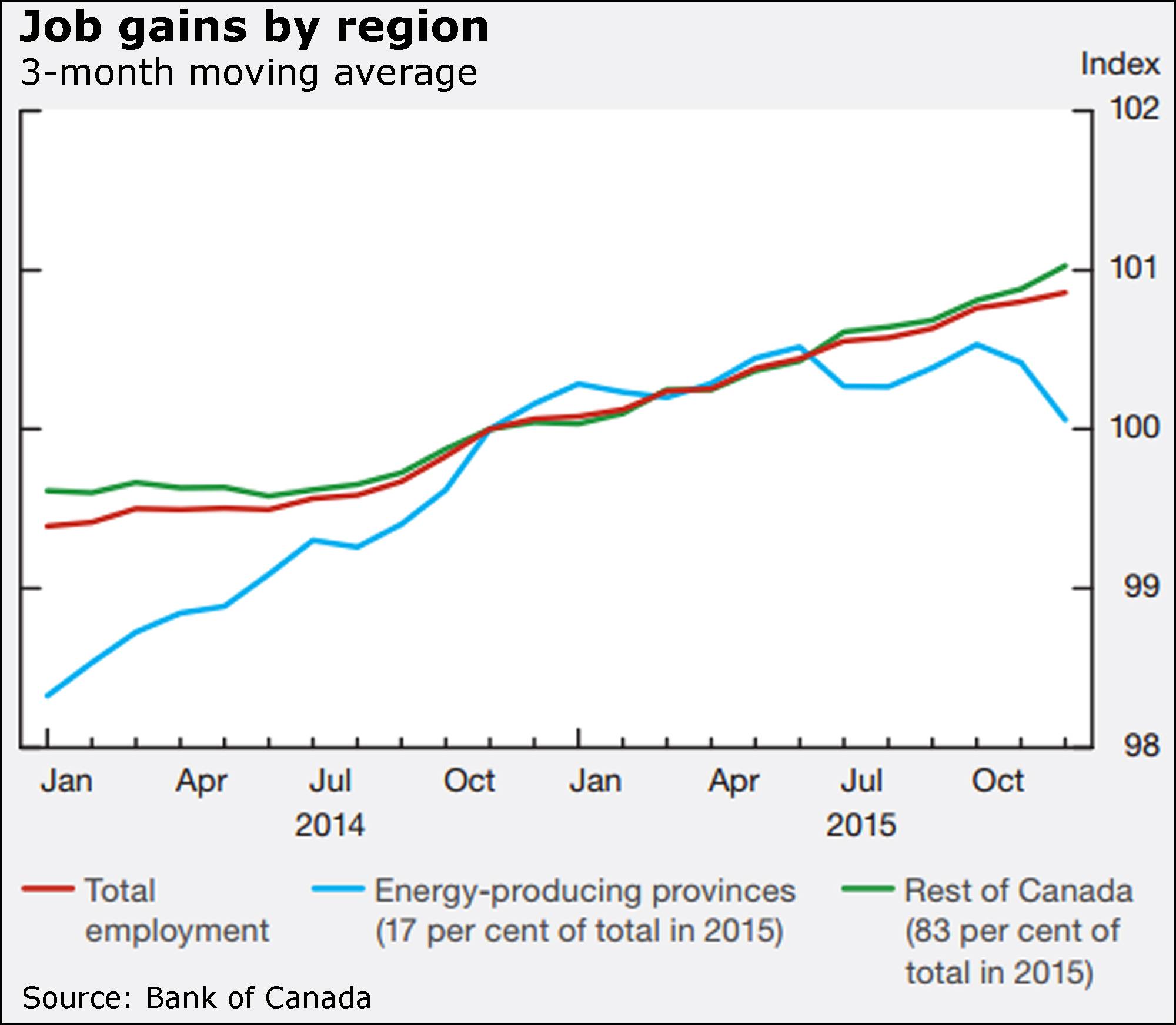 Here’s one that’s half empty: 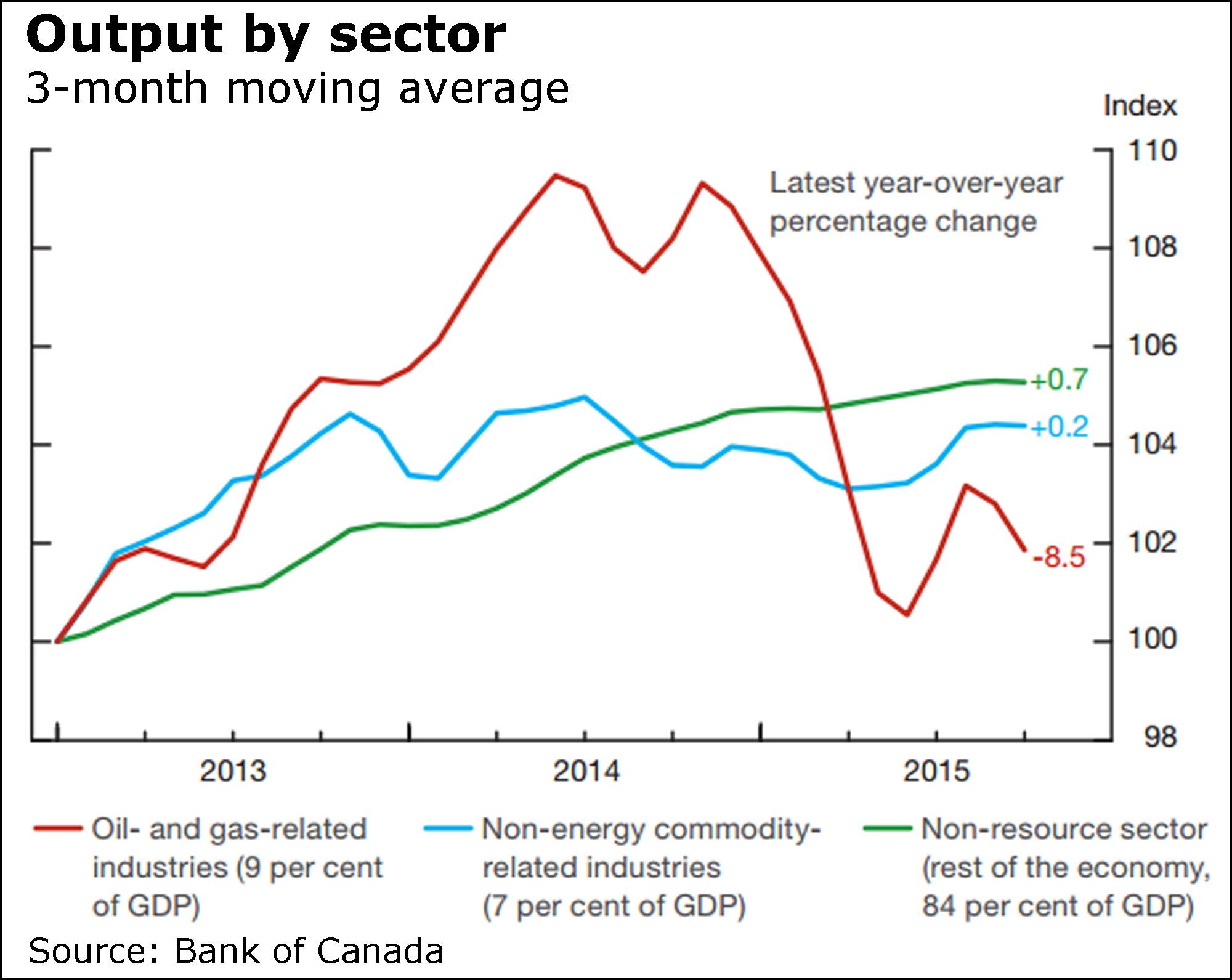 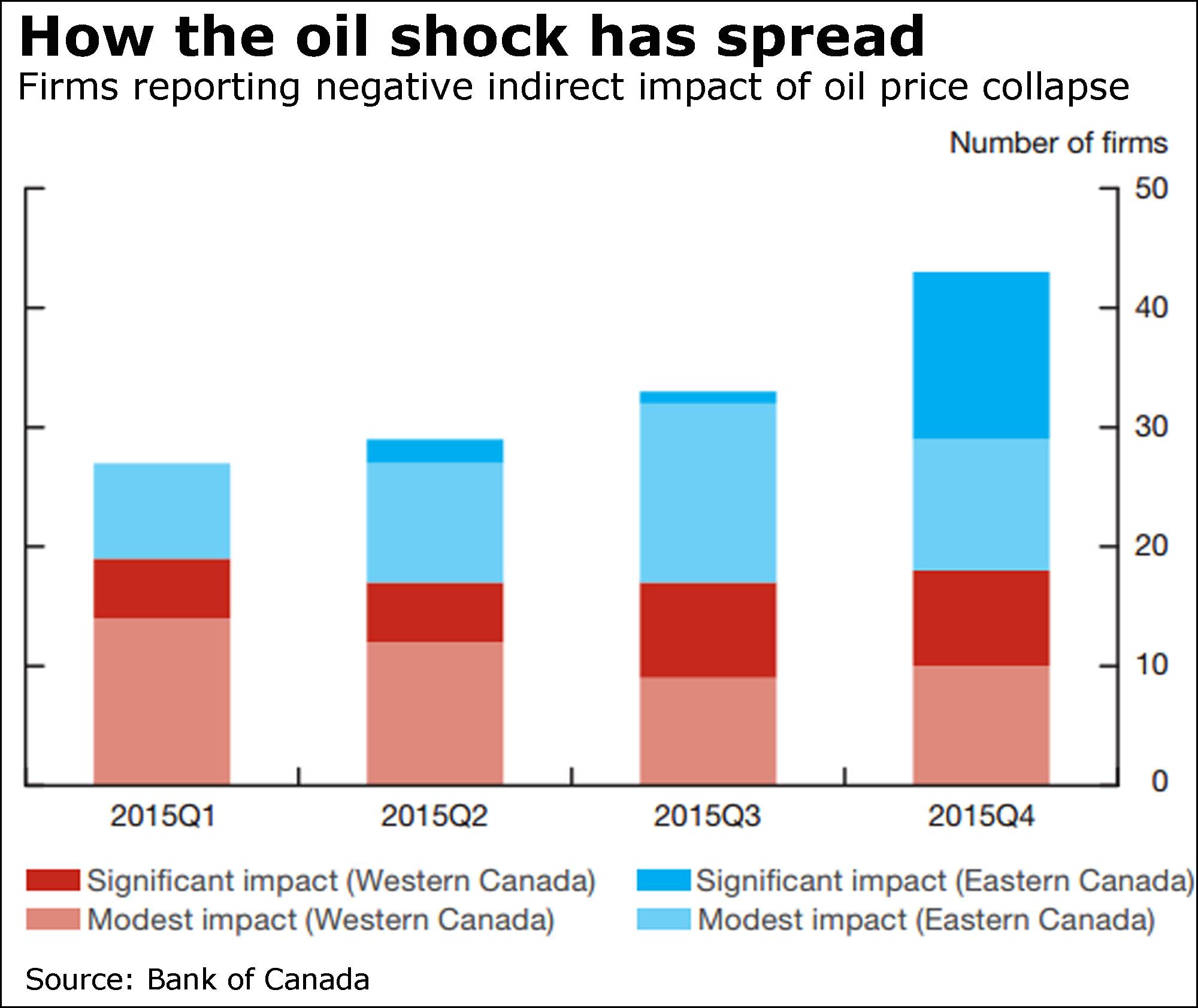 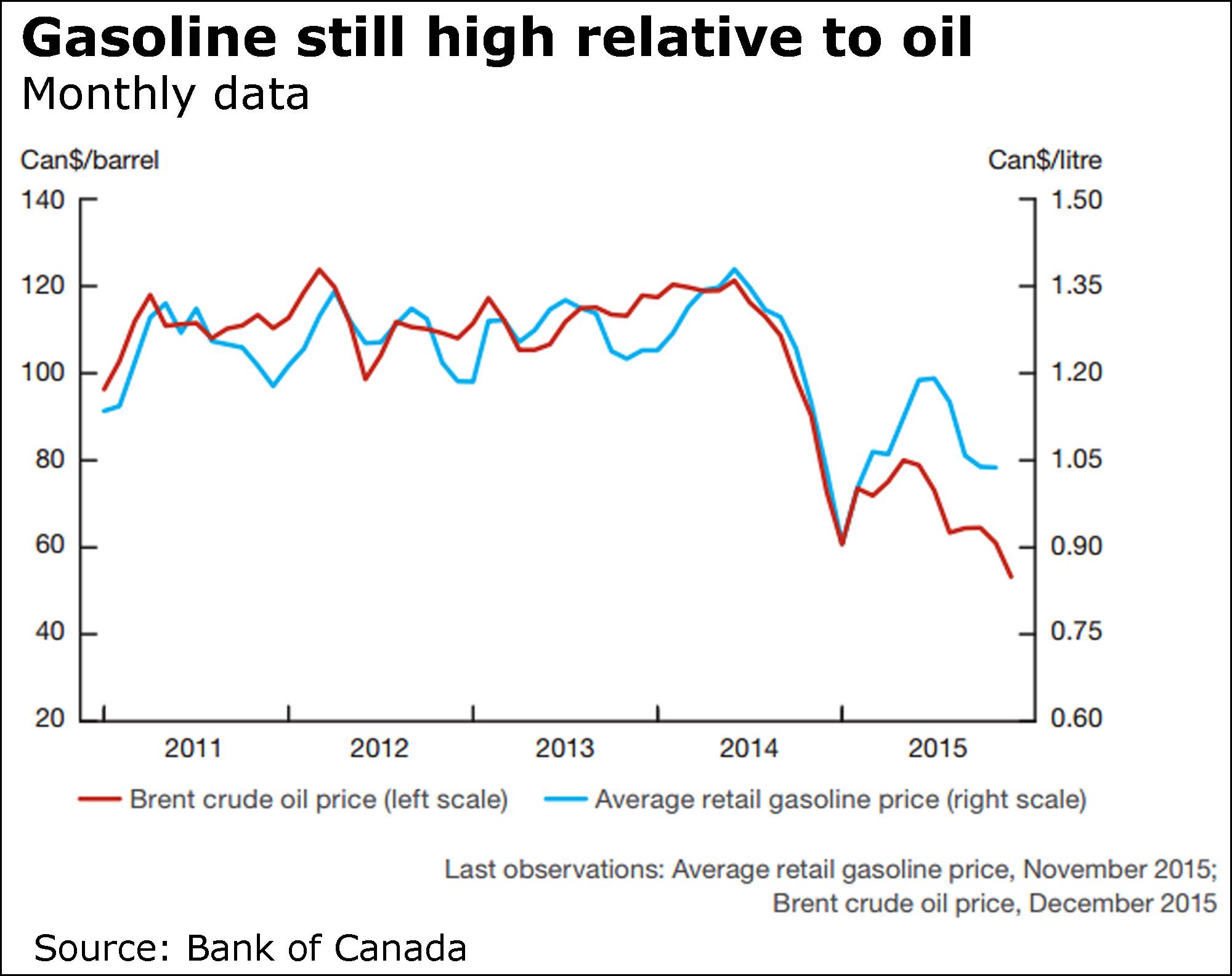 EI up in Alberta, Saskatchewan

The number of people receiving jobless benefits in Saskatchewan climbed 4.6 per cent in November from October, to almost 15,000. The year-over-year increase topped 35 per cent.

In Alberta, the number of EI recipients rose 2.7 per cent in November, to 61,300, or more than double that of a year earlier.

Claims, too, were on the rise, up 6.4 per cent in Saskatchewan and 1.7 per cent in Alberta.

Across Canada, the number of EI recipients stood at 544,200 in November, up slightly from October. 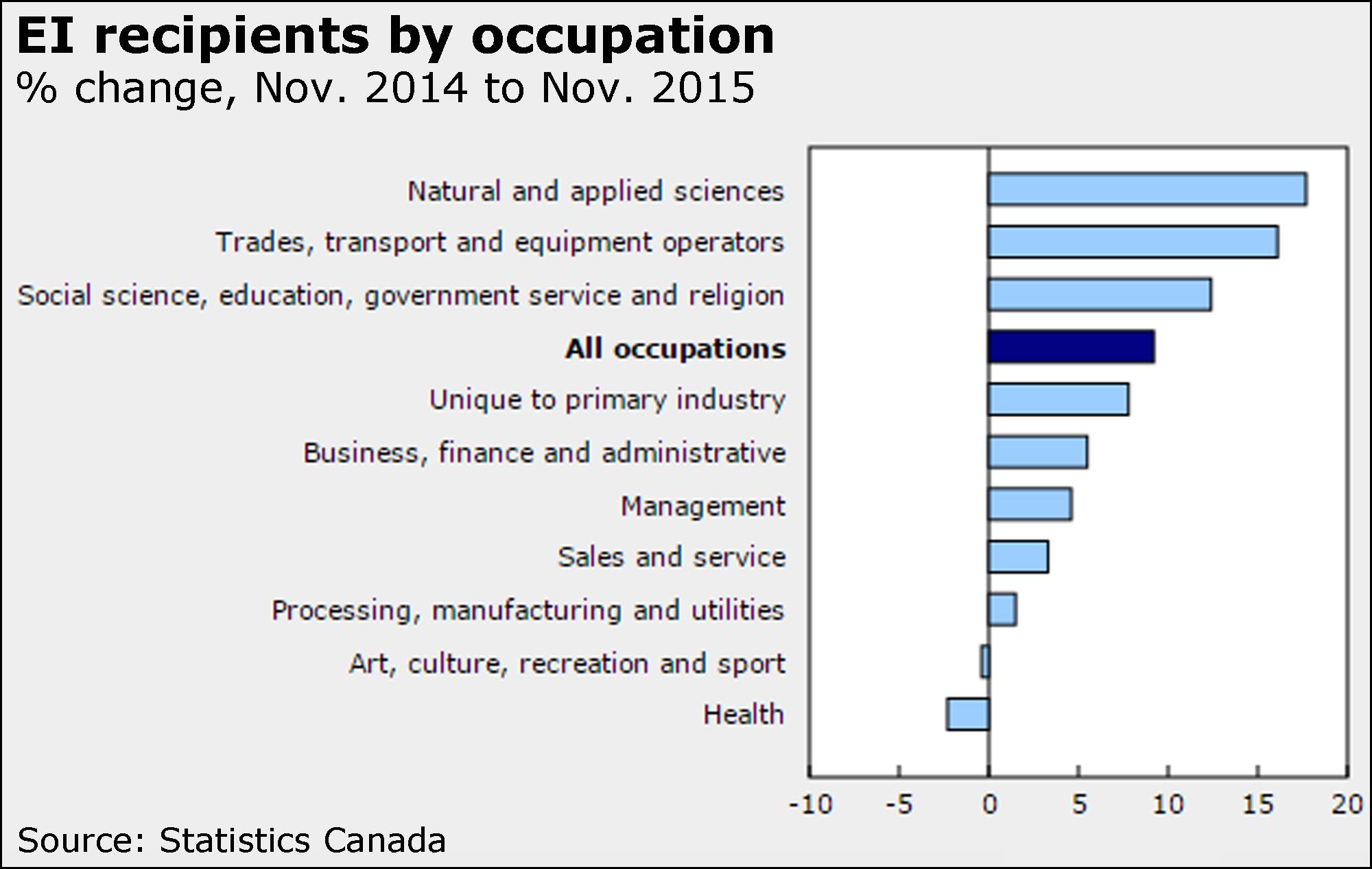 “The increase is in Alberta and Saskatchewan and in occupations that are linked to the energy sector,” said Benjamin Tal of CIBC World Markets.

“The numbers continue to reflect the dual personality of the Canadian labour market.”

The spreading troubles from the oil shock are playing out in so many ways.

The Globe’s and Mail’s Rachelle Younglai, for example, reports on the exodus of workers from Alberta to British Columbia and Ontario.

“In terms of the balance of supply and demand, the ratio of unemployment to job vacancies has risen sharply in the energy-producing provinces since the autumn of 2014, while the same measure has been relatively stable over the past several quarters in the rest of Canada,” the Bank of Canada noted yesterday in its monetary policy report.

“While the bank’s labour market indicators for British Columbia, Ontario, Quebec and New Brunswick have improved over the past year or so, those for the energy-producing provinces of have deteriorated,” it added. 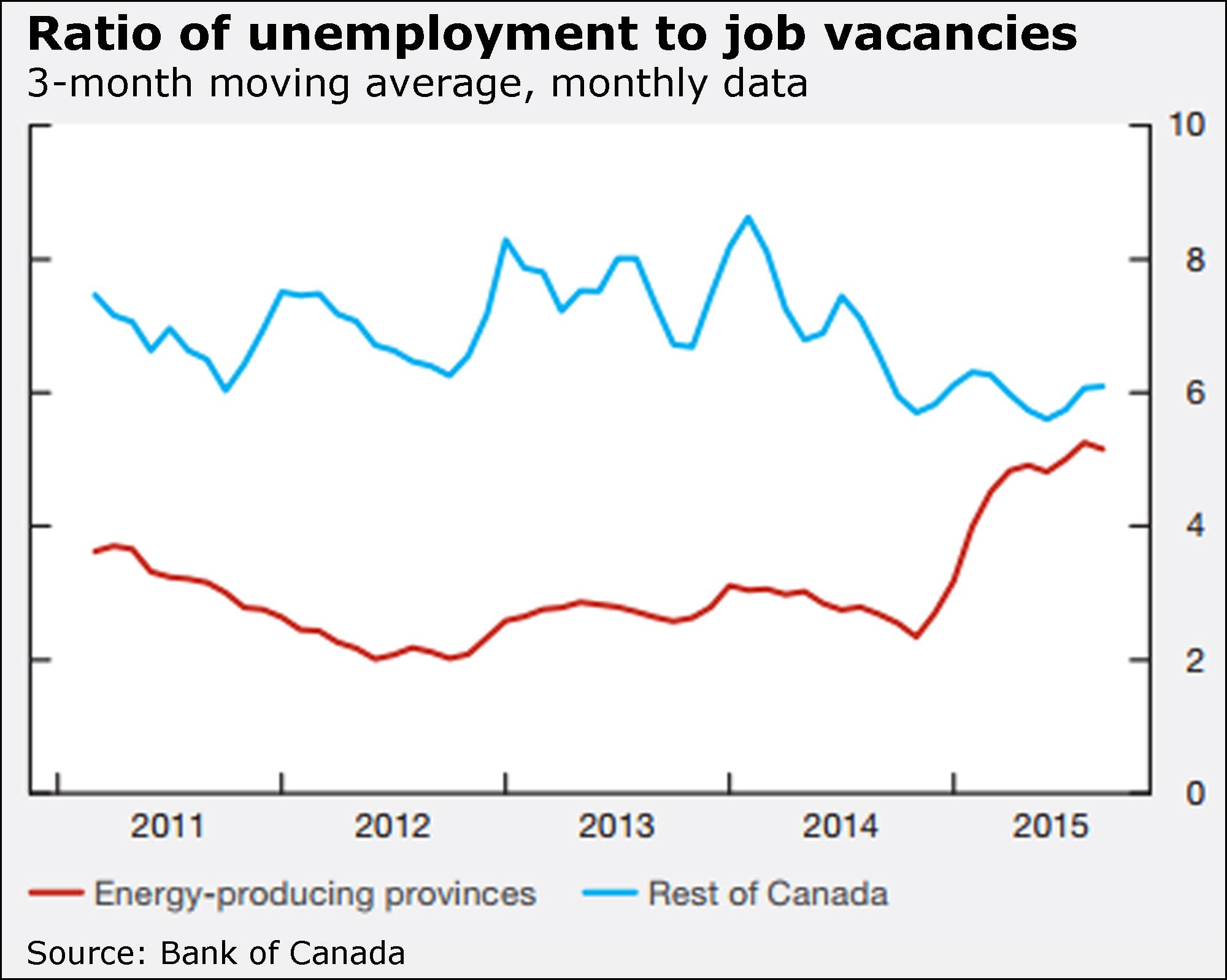 Like Mr. Tal, the central bank also noted the dual nature of Canada’s job market as the oil-dependent provinces take it on the chin.

“Underlying these national indicators are the diverging trends between the energy-producing provinces and the rest of the country, notably the rapid deterioration of labour market conditions in Alberta, as indicated by sharp increases in the unemployment rate and employment insurance claims in that province.”

The bloodletting continues in Canada’s oil patch today, with Pengrowth Energy Corp. the latest to tinker with its dividend.

Tinker is an understatement: Pengrowth suspended its quarterly payout, saying it would review it going forward.

“Pengrowth is taking this necessary step during this period of low prices to emerge with a better financial position when prices recover,” it said.

As The Globe and Mail’s Jeff Lewis reports, Whitecap Resources cut its dividend, and Husky Energy suspended its payout this week alone.