Canadian home prices have registered their strongest March since 2008, buoyed by exceptional levels in the hot Vancouver market.

Prices rose last month by 0.8 per cent from February, according to the Teranet-National Bank house price index released today. On an annual basis, prices are now up by 7 per cent for the best showing since late 2011.

A separate report today from the Canadian Real Estate Association also cited a record month for sales, up 1.5 per cent in March from February and more than 12 per cent from a year earlier.

Housing markets vary across Canada of course, from a hot Vancouver and Toronto to a cool Calgary.

Month to month, Vancouver prices surged 2.8 per cent, the Teranet-National Bank index showed, followed by gains of 0.9 per cent in Edmonton and Montreal, 0.6 per cent in Hamilton, 0.3 per cent in Toronto and 0.1 per cent in Winnipeg.

The group noted that March marked the 15th month in a row with no slippage in Vancouver.

Year over year, just four local markets have powered the overall index: Vancouver, up 17.3 per cent, Hamilton at 10.5 per cent, Toronto at 9 per cent and Victoria at 8.5 per cent. Calgary prices were down 3.7 per cent, and those in Halifax 4.6 per cent.

Prices were also up in Winnipeg on an annual basis, but by a much smaller 1.2 per cent. Prices also fell in Montreal, though slightly, in the Ottawa area by 0.1 per cent, in Edmonton by 0.5 per cent, and in Quebec City by 2.4 per cent. 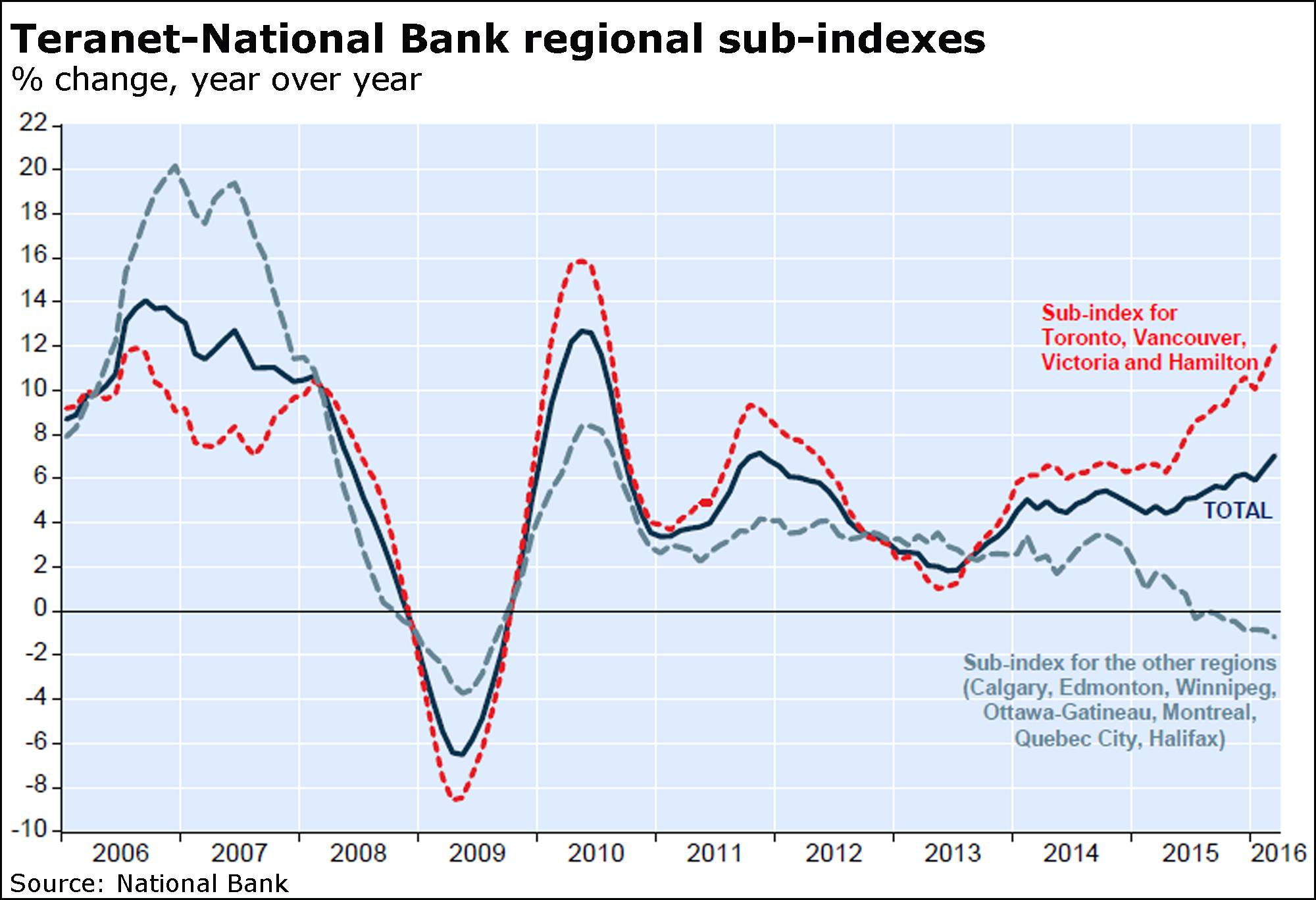 “For those living in Vancouver, Victoria, Toronto and Hamilton, the housing boom continues,” said Marc Pinsonneault and Krishen Rangasamy of National Bank.

“Elsewhere the long-awaited correction of the housing market has already arrived, as evidenced by the ninth consecutive month of declining prices (on a year-on-year basis) for the seven remaining regions covered by the Teranet-National Bank composite house price index,” they added in unveiling today’s numbers.

The economists also noted that some observers will continue to point the finger at foreign buyers in Vancouver and Toronto, but, really, both cities also boast strong jobs markets.

“Another characteristic of those two cities is tight supply,” they added.

“Note that sales growth has outpaced new listings growth in both cities lately.”

According to CREA, the national average sale price in Canada surged 15.7 per cent over the 12-month period, though the MLS home price index, which is deemed a better measure, rose 9.1 per cent.

Of course, the national average price gain was 10.4 when you strip out the greater Vancouver and Toronto areas.

“Greater Vancouver and the GTA are heading into the spring home buying season with soaring demand and a shortage of listings,” said the group’s president, Cliff Iverson.

CREA’s numbers differ somewhat from those of the Teranet-National Bank index, showing Vancouver and Toronto area MLS prices up 23.2 per cent and 11.6 per cent, respectively.

The CREA findings also how nine of the 11 markets it tracks posting annual increases.

Canada’s Mitel Networks Corp. has struck a $2-billion (U.S.) deal for Polycom Inc., creating what they say will be a leading Ottawa-based player in communications.

Mitel is offering $3.12 cash and 1.31 Mitel shares for every Polycom share.

Combined, the company will have more than 7,500 employees across the globe.

The latest budget from Newfoundland and Labrador is an ugly document in what it says about the economy.

Like that of Alberta, it tells the tale of a crippled resource economy. Unlike Alberta, the province’s new government is opting for austerity, which will probably only serve to worsen already harsh conditions.

We saw how that played out in some of Europe’s basket cases.

The severe fiscal issues aside, the forecasts for the next few years are exceptionally harsh in the region Canadians call the Rock. 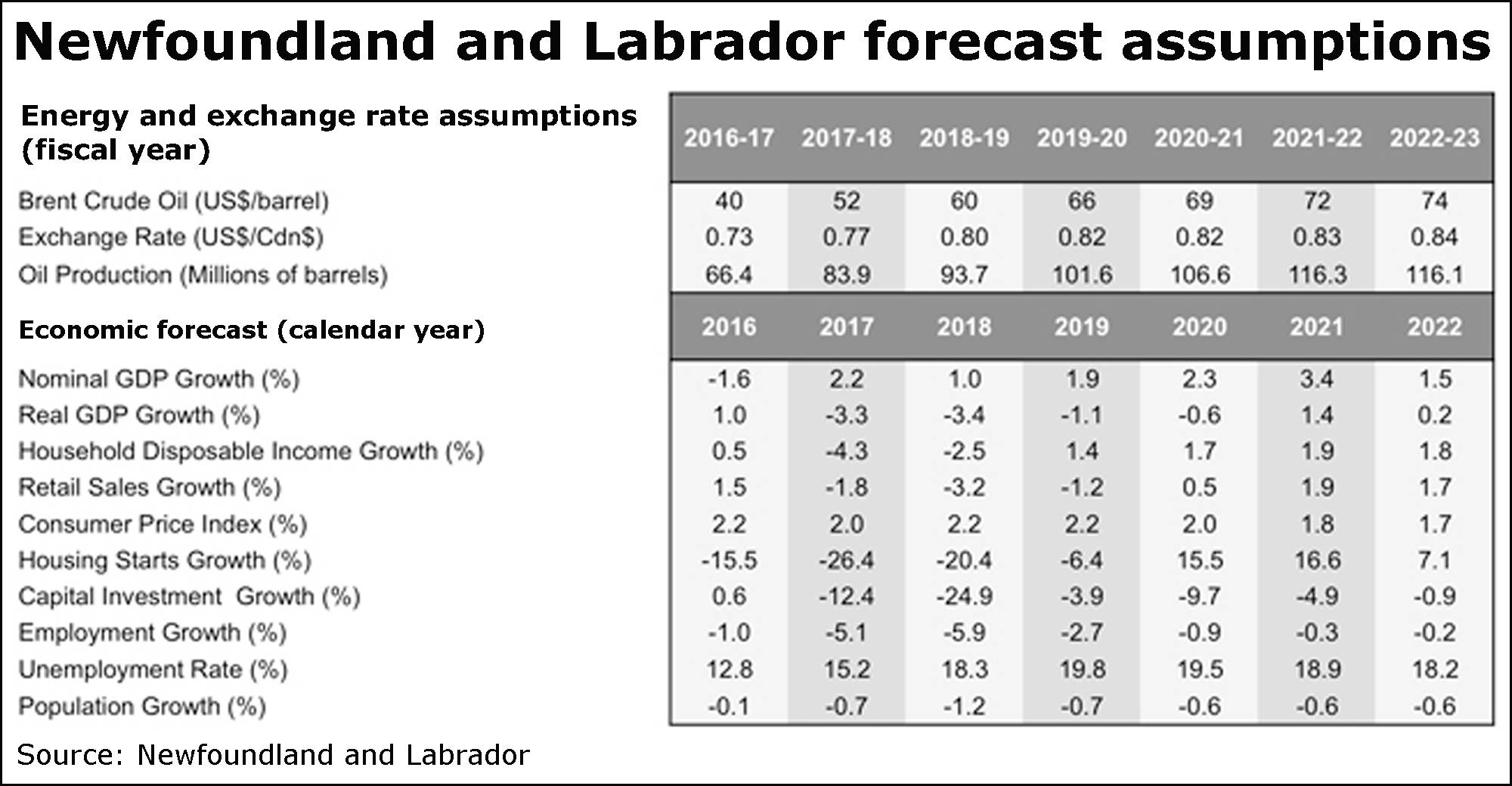 Look, for example, at unemployment, which is projected to peak in a few years at 19.8 per cent. That’s one in five people without work.

“Faced with the prospect of prolonged weakness in commodity prices, and a declining population, Newfoundland’s economy is expected to continue to struggle in the coming years,” said Andrew Grantham of CIBC World Markets.

“While real GDP is expected to rebound slightly in 2016 following an estimated 2.3-per-cent decline in 2015, it is then expected to fall again in each of the next four years as ongoing investments in projects such as Muskrat Falls wind down.”

Alberta’s New Democratic Party, on the hand, took a distinctly non-European approach to the hit it is taking from the oil shock.

As The Globe and Mail’s Justin Giovannetti reports, Finance Minister Joe Ceci unveiled a string of deficits, and a plan to spur employment growth.

“The province of Alberta is continuing with a firm dose of government spending to support the economy as it deals with the fallout from the negative oil price shock,” said BMO Nesbitt Burns senior economist Robert Kavcic.

“The good news here is that, while the credit rating has already fallen under pressure, they entered this period with more capacity to run big deficits than any of its provincial peers.”

As always, there are questions about the official numbers from Beijing, which reported economic growth of 6.7 per cent in the first quarter.

“While GDP growth edged down in Q1, there are at least signs in the more recent data that momentum was improving going into this quarter,” said Julian Evans-Pritchard, the China economist at Capital Economics.

“With monetary and fiscal conditions still being loosened and credit growth accelerating, we think this may signal the start of a cyclical recovery.”